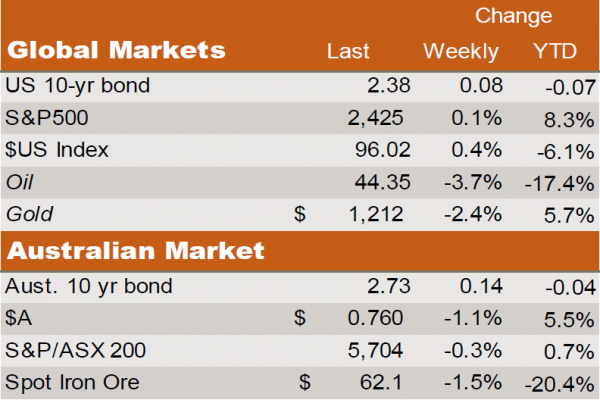 Trepidation over the pace of central bank tightening remained the major global market theme last week – and the question of whether central banks tighten policy even if inflation remains below target is shaping up to become an important issue in coming months. Reflecting these concerns, bond yields pushed higher last week and equity markets continued their nervous consolidation.

Last week’s Fed minutes suggests it remains intent on raising rates at least once more this year and to start winding down its balance sheet.  Notable within the minutes were growing “financial instability” concerns – suggesting that, despite low inflation, the still reasonable strength in the economy and risk of equity markets becoming too overvalued could be enough justification to continue tightening policy.

The Fed’s dilemma was highlighted by last Friday’s June payrolls report – which revealed better than expected jobs growth (220K) but still relatively dormant wage inflation.  A further drop in oil prices – reflecting healthy production in both the US and OPEC – also highlighted the downside risks to inflation.

Markets were also roiled last week by the minutes from the European Central Bank June – as ECB members debated whether to drop the Bank’s pledge to boost asset purchases if need be. Although it ultimately kept the pledge once again, the debate was yet another signal that the ECB is inching closer to policy tightening.

Looking to the week ahead, there is only second tier US activity data to digest (such as retail sales and industrial production), and perhaps more important will be the start of America’s June quarter earnings reporting season. Against the backdrop of hawkish central bank rhetoric, the likely continuation of good US corporate earnings performance should offer some solace to nervous global equity markets.

The major development locally last week was the steadfast refusal of the Reserve Bank of Australia to follow the lead of other central banks and adopt a more hawkish tone its post-meeting policy statement on Tuesday.  As I outlined last week, the RBA’s more neutral stance was welcome and should have been expected given Australia’s already high-interest rates (by global standards) and somewhat softer labour market. That said, the economic news was generally good – especially the second successive solid monthly retail sales gain after worrying weakness earlier this year (who said the consumer was dead!).

Also not dead are Sydney house prices, which rebounded in June after rare (some say seasonal) softness in May. A further lift in ANZ Job ads was also reassuring as regards the near-term labour market outlook, though the further leg down in home building approvals pointed to the economic challenges we’ll continue to face as the home building boom inevitably fades.

As for this week, housing finance data on Tuesday will provide an update on the extent to which investor home demand is waning relative to owner occupier demand. Likely more important, and also on the same day, will be an update on (still impressively bullish) business sentiment in the National Australia Bank monthly business survey.