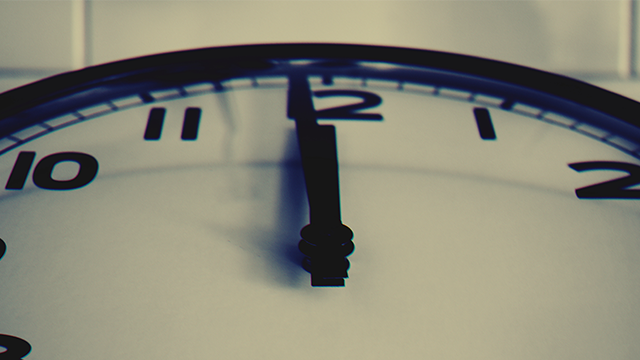 Given the current US economic expansion is one of the longest on record, it’s natural for investors to ask when the good times might come to an end.  One closely watched indicator is the US yield curve, which has continued to flatten over the past year – but at this stage does not suggest a recession is looming. That’s also true from a reading of other recession indicators.

Unlike in Australia, the US actually has a quasi-official economic-cycle dating organisation (the National Bureau of Economic Research or “NBER”) that continually monitors economic indicators and declares when the world’s largest economy has tumbled into and emerged from recession.  For the record, there have been five declared recessions since 1980, with the latest being during the global financial crisis – it ‘started’ in December 2007 and ended 18 months later in June 2009.

One problem with the NBER’s work, however, is that there is usually a lag of at least six months to over a year before cycle turning points are announced.  It was not until December 2008, for example, before the wrenching 2007-09 recession was officially declared to have begun in December 2007!

It begs the question: what indicators seem best able to indicate trouble again, and how reliable have they been?

The US Yield Curve

One popular potential “lead indicator” of recession is the US yield curve – or more specifically, the yield gap between US 10-year and 2-year Federal Government bonds.  It’s often argued that a flattening yield curve, and indeed a negatively sloping curve (i.e. 2-year bond yields higher than 10-year bond yields) can indicate a recession is looming.

As evident in the weekly chart below, however, the mere fact that the yield curve is flattening (i.e. short-term rates are rising faster than long-term rates) is a poor indicator of recession. Indeed, the yield curve usually peaks within a year or so after recessions end, once it is clear the Fed is close to the end of its recession-busting easing cycle.  Thereafter, the yield curve tends to flatten as the economic expansion matures and markets begin to anticipate eventual policy tightening. It steepens up again when growth slows and markets move to anticipate eventual policy easing. 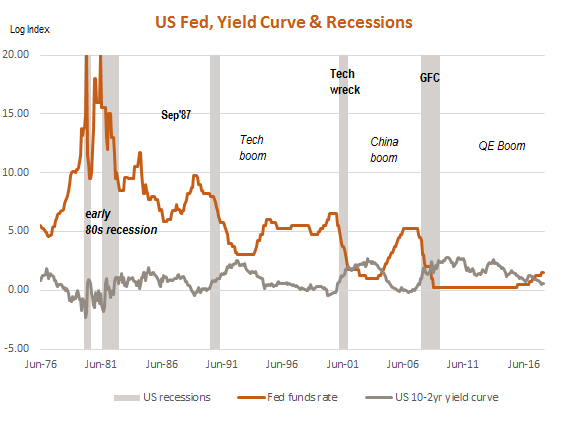 In short, a flattening yield curve does not necessarily indicate a recession is looming – merely that economic growth is maturing and financial conditions are tightening. What’s more, once the yield curve does turn negative (or “inverts”), history suggests it can take up to two years before the next recession begins.

The good news is that today the US yield curve is still in positive territory, which at least on this indicator suggests a recession is some time away.

Apart from the yield curve, here’s a few other of my favourite recession indicators. 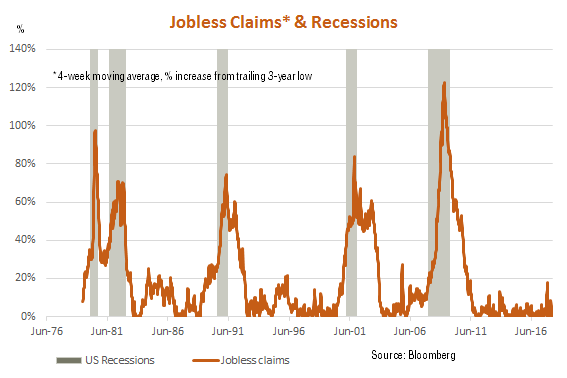 Although only available on a monthly basis, the Conference Board leading index is also another useful measure.  As seen in the chart below, it rarely provides false signals and is usually down by around 5% from its peak by the time a recession is considered to have commenced.  A notable weakening of more than 3% or so from its previous peak would be a warning sign of recession potentially ahead.  So far at least, there’s no sign of that. 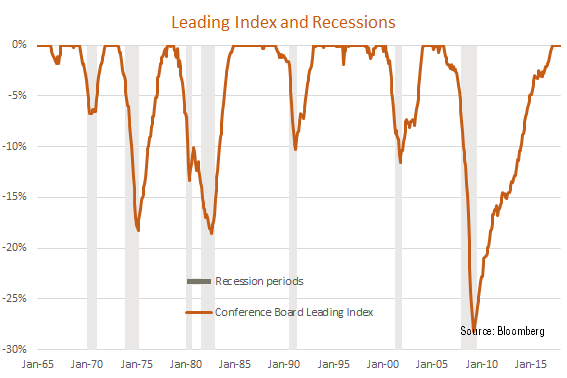 Of course, then there’s the share market itself.  As evident in the chart of closing weekly prices below, share prices also tend to decline before the onset of official recessions, though shares prices can also suffer many moderate drops of 10% of more without a recession taking place.  A bear market decline of 20% or more is usually sufficient to suggest the economy has tumbled into recession (even if it has yet to be officially announced), though the 1987 slump was a notable exception.  What’s more, most of the damage to the share market is done after a recession has commenced – meaning it is not necessary for share prices to have already fallen by 20% by the time a recession starts. 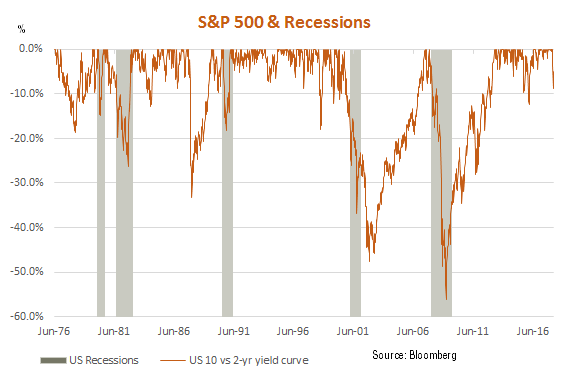 Either way, the good news is that the US share market is still near record highs and has not yet encountered a 20% decline on a closing weekly price basis.