Risk-on sentiment prevailed across global markets last week – so much so that even previously neglected sectors such as financials began to attract interest. Key drivers were upbeat comments from JP Morgan CEO Jamie Dimon, and the fact Trump failed to follow through on threats to sanction China over Hong Kong. Bigger picture, equities are still basking in ‘re-opening’ hopes, supported by the view the Fed will only pump prime further if need be. In essence, good news is good news – and bad news is good news also! Notably, long-term bonds yields thus far are staying down – either due to central bank support and/or lingering scepticism of the risk-on rally within the fixed-income market.

Technically, the S&P 500 consolidated after its recent range breakout, and also pushed through the closely-watched 200-day moving average. Interest now is whether the S&P 500 can also push through the early March consolidation zone around 3,100 (the only fleeting consolidation period during the sharp sell-off!). If the S&P can sail through this zone, the next key target – unbelievable as that sounds – is the 3,386 all-time high on 19 February. 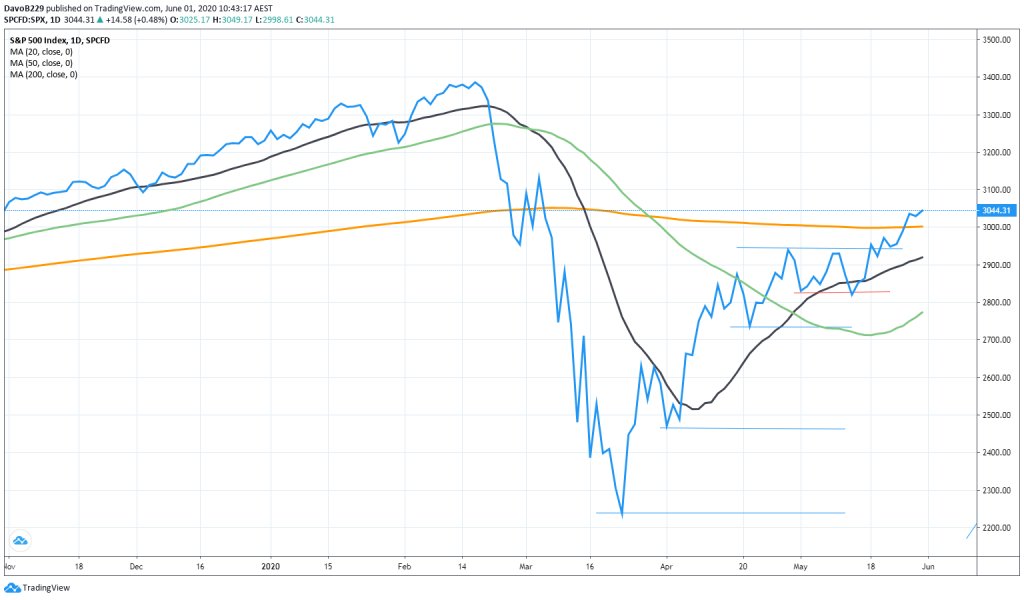 Key highlights globally this week include U.S. May ISM manufacturing and non-manufacturing indices on Tuesday and Thursday respectively. Both are expected to enjoy a modest bounce, albeit remain at very low recessionary levels – though markets may well see fit to rejoice at their apparent bottoming out. Similarly, Friday’s U.S. payrolls report is expected to reveal another 8 million lost their jobs in May (after a 20 million loss in April), with unemployment surging to 19.7% from 14.7%. Again, it may not surprise if the markets rejoice at the idea that “the worst may be over”!

As I previously suggested, those of us counting on a decent market pull-back (even new market lows) may need to wait until after the initial post re-opening bounce in economic data over the next month or so. A correction may come sooner, though this might require clear signs of a second wave of CV-19 emerging in at least one major economic region. Meanwhile, the S&P 500 is now trading at a ratio of almost 22 times forward earnings – a level not seen since the dotcom bubble, albeit with much lower bond yields today.

The Australian market also enjoyed solid gains last week, with the beaten down financial sector also rebounding strongly – consistent with the ‘value rotation’ seen in global markets. The Australian market has also technically broken to the topside of its recent range, although the market retreated a little on Friday and also (so far) this morning.

In terms of local data, the Q1 capital expenditure survey revealed a notable (but unsurprising) downgrade to 2020-21 planned business investment, which only highlights the challenges ahead for the economy despite all the ‘re-opening’ celebrations currently underway.

Q1 GDP is the data highlight this week, with the market pencilling in a small 0.3% contraction. If so, this will confirm Australia will experience its first technical recession i.e. two consecutive quarters of negative GDP growth in decades – given the likely very sharp drop in Q2 GDP also expected. 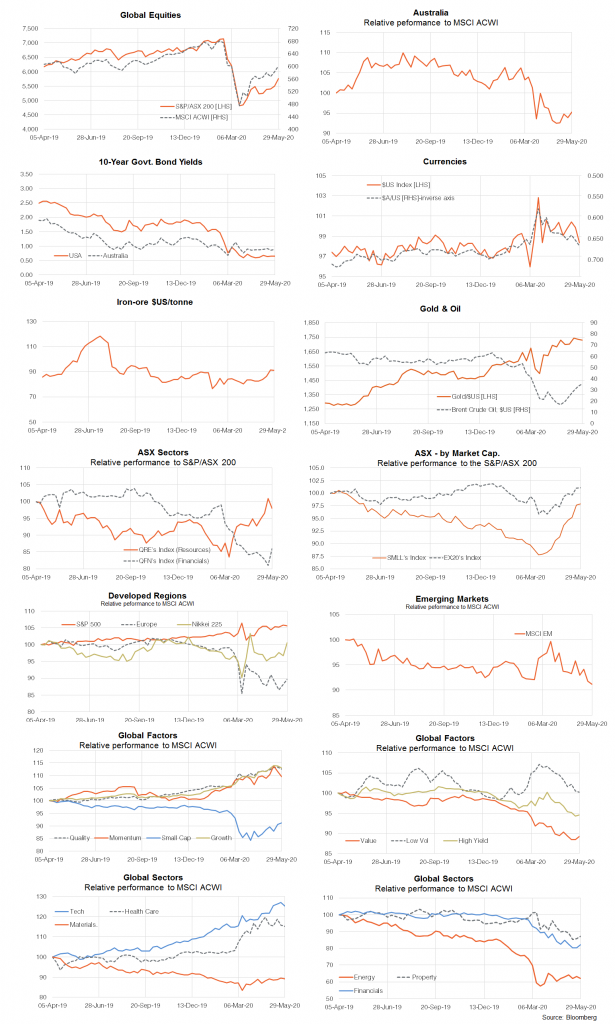