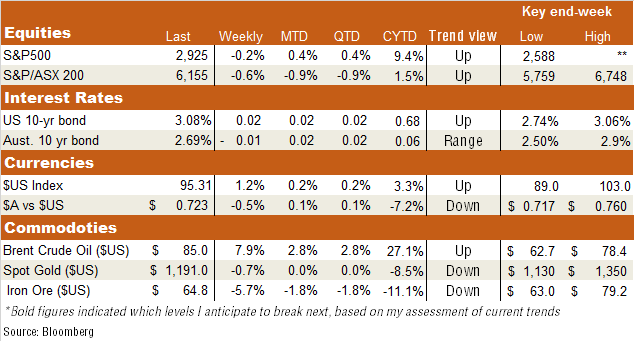 It was a moderate risk-off week for equities thanks to both disappointment that China essentially called off new trade talks with the US and because of the ongoing hawkishness of the US Federal Reserve.

As regards trade talks, however, the past week has concluded on a positive note with Canada agreeing to an 11th hour deal with the US, thereby concluding a revamped NAFTA deal. The deal highlights that, at the end of the day, US President Trump is seeking to conclude deals (rather than just tear up old ones) and can agree to what appear relatively incremental changes to existing arrangements if it at least allows him to claim a win.  That bodes well for an eventual deal with China, who I suspect now feel emboldened to hold out and eventually offer some relatively modest proposals (i.e. less than it had feared) even if this begrudgingly also allows Trump to claim a victory of sorts.

In other news, the Fed raised US rates as widely expected and largely stuck to its expectation for a further rate rise in December and several more rate hikes in 2019.  Provided the US economy and corporate earnings continue to tick over nicely, I think the market can live with an anticipated three more hikes by mid-2019 – after which my base case scenario is that the Fed will then announce a (market supportive) pause.

The other major news last week was a further surge in oil prices which, as I’ve previously indicated, is helping energy related ETFs.

In Australia, highlights included a better than expected final Federal Government budget outcome for 2017-18, which suggests next year’s Budget could include some extra pre-election goodies. The Hayne Royal Commission interim report was also released and, while unsurprisingly scathing of the finance sector, was light on proposals for draconian new regulatory change.  It’s early days, but this could be a foretaste of a potential relief rally for the sector if investors start concluding the Commission’s outcome is “not has bad as feared.”

Although there is a smattering of local and international data this week, I’ll focus on the single biggest event risk – namely US September payrolls on Friday.

Although another solid employment gain is expected of around 185k, a keen market focus will be average hourly earnings, in view of last month’s higher than expected 0.4% monthly gain, which pushed annual growth to 2.9%.  As it stands, the market expects monthly earnings growth to slow back to 0.3%, which would drag back annual growth to 2.8%.  That result or even another gain of 0.4%, which kept annual growth at 2.9%, might be greeted with some market relief.

Of course, a 0.5% gain (which in fact happened in September last year) would push up annual growth to 3.0%, which could unnerve both bond and equity markets.  Again, while I think equities will eventually learn to live with US wage growth at just over 3%, there could be temporary “sticker shock” in the month in which it first happens.