After a very worrying start, global equities eventually recovered over the course of last week – thanks to no immediate Chinese retaliation to Trumps’s latest tariffs hikes and ongoing signals that the two sides are still at least talking.  Hope springs eternal!

It helped also that US economic data remained encouraging.  US Q2 annualised GDP growth was revised down only a touch to 2.0%, underpinned by still strong consumer spending.  Consumer confidence also held at high levels. Core capital goods orders (a timely monthly proxy of business investment) also held up in July, and are showing little sign of capitulation just yet.

Herein lies the issue: even if the US and China fail to strike a trade deal (and there are reports China has given up doing a deal until after the next Presidential election), markets will continue to cling to the signs of hope that a deal could eventually be reached – or at least the “can will be kicked down the road” – provided US economic data continues to hold up. So far, apart from the dubious signal from the inverted yield curve, signs that the trade tussle is inflicting a more serious slowdown in the US economy still remain scant.

What we do know is that the alternate Markit indices for the US manufacturing and services sector have already been released for August, and both were weaker than expected.  Indeed, the manufacturing index dropped from 50.4 to 49.9 while the services index slumped from 53.0 to 50.9.  So watch out for a potentially weaker than expected set of numbers – which could restoke recession fears and see both equities and bond yields head lower.  For the record, history suggests a drop in the manufacturing PMI to at least 45 usually means the US has entered recession. We are not there yet – and manufacturing is less important than it used to be (now around 10-12% of GDP) – but it still bares watching!

In other news, UK PM Johnson got the Queen to agree to an unusually long suspension of Parliament until October 14 – or only two weeks before the October 31 Brexit deadline.  No-deal opponents now have a few days to either pass blocking legislation, change the Government and/or usher in new elections.   Johnson is instead insisting Parliament hold its nerve, as he’s still claiming a deal with the EU at the next summit on October 17 can be achieved.  I doubt it!  Either way, immense uncertainty is likely to plague the UK outlook for some time yet.

We got more downbeat economic news in Australia last week, with a bigger than expected slump in Q2 housing construction and further signs of topping out in infrastructure investment.  The capital expenditure survey also suggested business investment was soft in Q2 and the outlook is for only continued very modest capital spending over the coming financial year.

RBA Deputy Governor Guy Debelle, meanwhile, suggested the RBA would be loath to cut the official cash rate below 0.5% and might instead consider “other options” if further stimulus were required next year.  For the record, I still expect the RBA to cut the cash rate to 0.5% (from 1% at present) by February 2020 – though is unlikely to cut rates at this week’s meeting, if only because it may want to drag out the time period before it reaches its 0.5% limit.

That said, the RBA may well now feel the need to cut rates next month if Wednesday’s Q2 GDP report is as weak as feared.  As it stands, the market anticipates GDP grew by 0.5%.  That would mean growth over the year would ease from 1.8% to 1.4% – and equal to the low during the GFC. We’ll get company profits and net-exports data over the next two days which will firm up this GDP estimate – but a result closer to zero can’t be ruled out, and which would likely create a spate of potentially confidence sapping negative news headlines.  That risks a vicious circle, where weak data hurts sentiment and further weakens the economy. 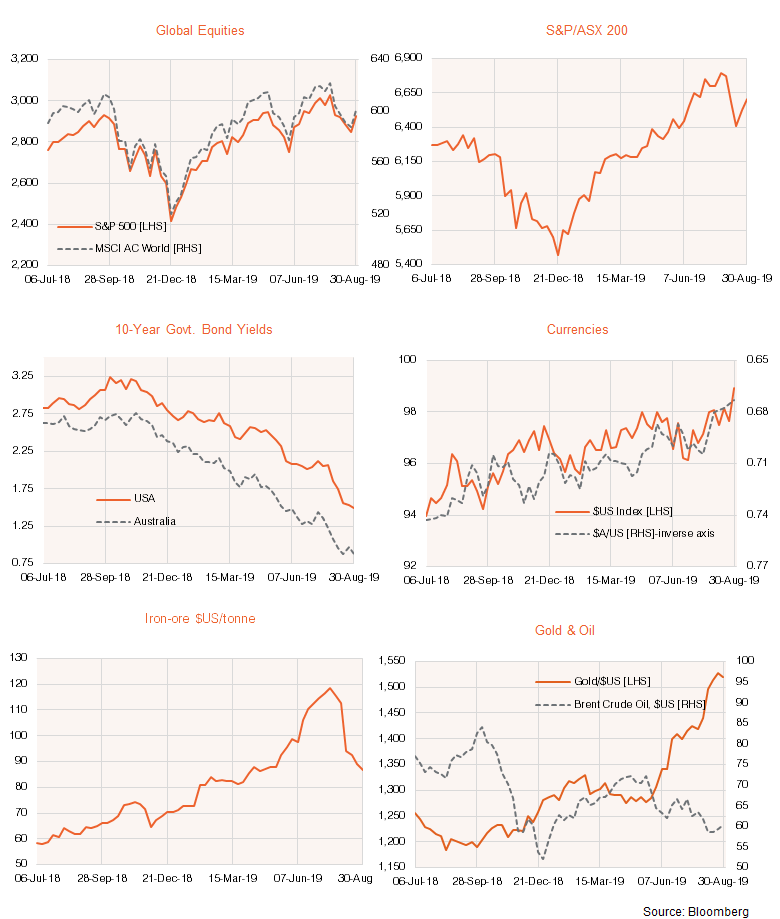