Global equity markets nervously retreated on the back foot last week and bond yields dropped further – reflecting soft US and European manufacturing data, a surprisingly dovish turn by the Federal Reserve, and inversion of part of the US yield curve.

The Fed’s latest set of “dot points” completely removed the two projected interest rate increases for this year – in a surprise for markets which had expected either no change or the removal of only one rate hike.  While markets initially rejoiced, a nagging concern over “what the Fed might know” about the economy soon crept back into market thinking.

Not helping sentiment was Friday’s round of service and manufacturing surveys for both the US and Europe, which were all a bit softer than expected.  Most concerning is that European manufacturing (especially in Germany) is so far failing to rebound after trade tensions and disruptions caused by new car regulations hurt activity late last year.  China’s slowdown is taking its toll.  The better news is that the service sector in both Europe and the US remains on a stronger footing, and even US manufacturing is overall still solid.  If the trade wars ease and/or China more seriously re-stimulates its economy, global manufacturing stands a fair chance of recovery. Meanwhile, lower bond yields saw existing US home sales surge 12% in February.

Also attracting attention last week was the decline in US-10 year bond yields to below 3-month rates – given this has tended to precede most US recessions in recent decades. The problem is that this seems necessary – but not sufficient – to signal an impending recession as it has led to some false signals in the past. It also “leads” recessions with long and variable lags. Also complicating matters is that the overall inflation-adjusted Fed fund rates is little more than zero, and considerably lower than levels that have been associated with previous similar curve inversions and recessions.

Closer to home, there was little new to report – with the RBA minutes again affirming the Bank’s new neutral bias and the ABS official measure of house prices showing further contraction in Q4.  Note also skilled vacancies declined a little further in February, adding to the growing evidence of an impending slowdown in the labour market.

There’s little major market-moving data around the world this week, with focus likely to be on any progress (or lack thereof) in US-China trade talks, with several senior US officials bound for China.  To my mind, provided neither side threatens new tariffs, the trade-talks are now a neutral market influence – with some upside potential when and if a deal is finally concluded. Data wise, US Q4 GDP growth is expected to be shaved back from 2.6% (annualised) to 2.4%, while annual growth the core private-consumption deflator should hold comfortably below 2%, affirming US inflation (for now at least) remains benign.

Hot off the press, the Mueller investigation appears to have exonerated Trump of possible collusion with Russia, which could spark at least a brief relief rally on Wall Street early this week.

In Australia, credit growth is likely to remain soft when reported on Friday while the ABS official measure of job vacancies for Q1 will provide further evidence on the degree of labour market softening. 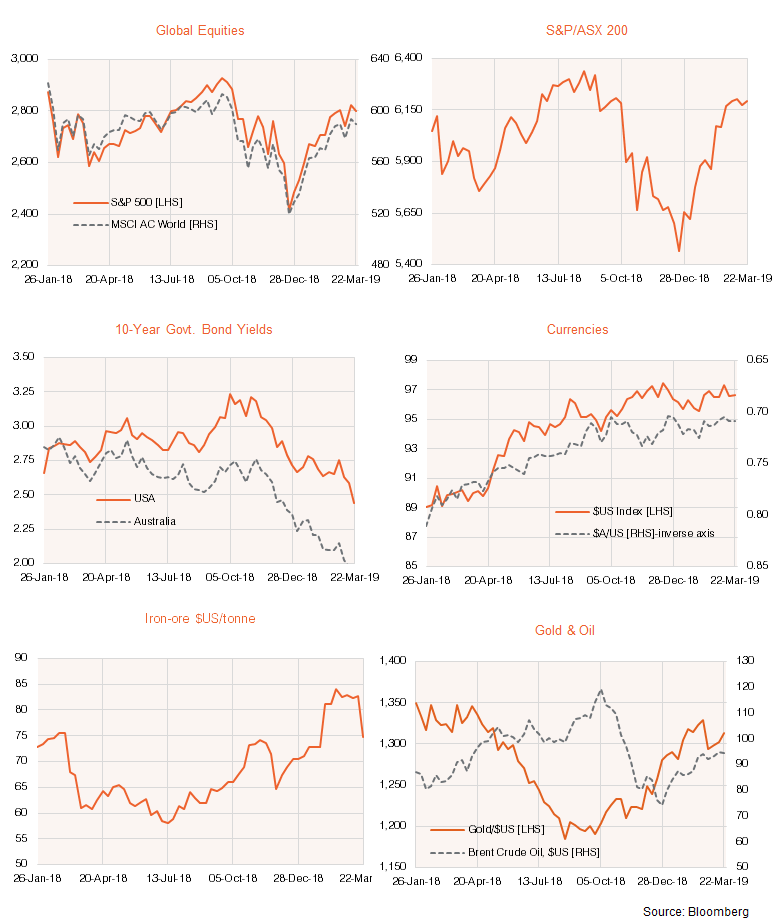