Global stocks rebound last week with the US S&P 500 Index rising every day to stage its strongest weekly gain in five years. The highlight of the week was Wall Street’s dismissal of the higher than expected US January CPI result – contrary to fears that the market was extremely sensitive to the number. As it turned out, the core CPI rose 0.3% in the month (market expectation 0.2%) and 1.8% over the year yet – after an initial sell-off – the S&P 500 then shrugged and ended the day 1.3% higher.

Having dropped 10% from its late January peak, the US market has now broadly recovered half its losses.   Helping stocks last week was the fact that long-term bond yields also remained reasonably well contained, with US 10-year bond yield only lifting 2bps to 2.87%.  The $US, meanwhile, remains extremely unloved, dropping a further 1.5%, with analysts using concerns over America’s widening Federal Budget deficit as the latest rationale.

In Australia,  having fallen only half as far as the US market (-5% vs -10%), local stocks have also staged a more modest recovery, with the S&P/ASX 200 up only 1.1% last week. ASX futures hardly budged in after-hours trading, suggest the market will open close to flat this morning.   Last week’s local highlights were a strong rise in the NAB Index of Business Conditions to near record highs, a further solid lift in employment, and a surprisingly frank admission from RBA Governor Phillip Lowe warning that the quest to cut corporate taxes should not come at the expense as Budget repair. Almost immediately, Treasurer Scott Morrison responded that planned tax cuts were already budgeted for and remained consistent with projections of the Budget returning to surplus by 2020-21.

Globally, the key highlight this week is likely to be the minutes of the Federal Reserve’s January policy meeting – even though the report is now dated as it came before the latest bout of market volatility.  The minutes are unlikely to shake the market’s growing conviction that the Fed will hike rates for the first time this year next month.  Other highlights include key US manufacturing and service sector PMI reports, which should continue to show the US economy humming along nicely.

In Australia, Wednesday’s December quarter wage price index will attract interest given the growing reality that persistent weak wages growth now seems the one key factor or “missing ingredient” holding back consumer spending and inflation and hence, also, the RBA’s ultimate desire to begin renormalising interest rates.   Sadly, we’re unlikely to get much improvement in the wage story this week, with the WPI expected to again rise by only 0.5% and 2.0% over the year.  Given a still reasonably high labour under utilisation rate (13.7% when last estimated in Nov’17), it’s still way premature to expect a decent lift in local wage growth anytime soon. 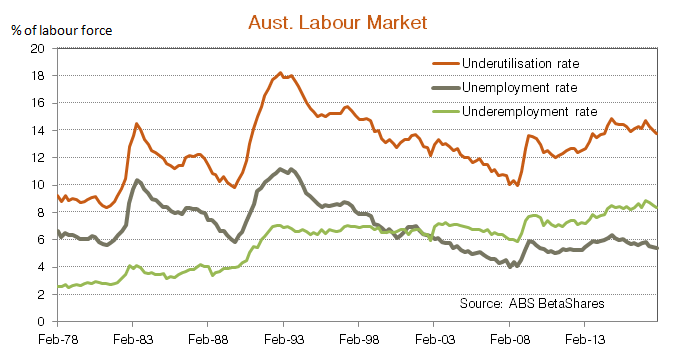