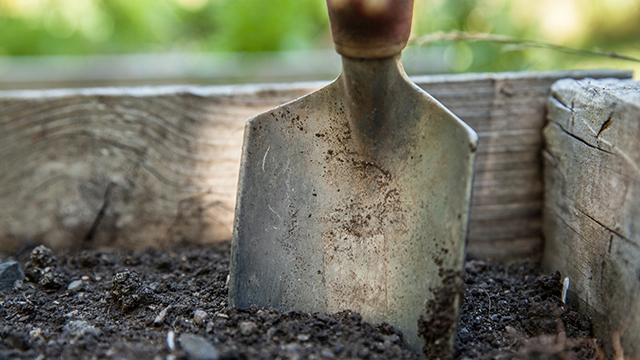 The Australian sharemarket has struggled to match the performance of global peers in recent years. While a number of theories have been put forward to explain our relatively poor returns, this note suggests two factors tend to dominate: trends in export commodity prices and the health of the global technology sector.  On this basis, it seems likely our market could struggle against global peers for some time yet.

Australian equities have tended to underperform the global benchmark in recent years, though the degree of underperformance does depend on how returns are measured.

On a pure price basis (i.e. before dividends), the S&P/ASX 200 Index since end-2012 has produced annualised gains of only 4.3% p.a. (to end-September), compared with 10.1% p.a. for the MSCI All-Country World Index on a local currency basis.   Allowing for the fact Australian companies pay higher dividends, however, the difference in total returns is not as great – with total returns for the local market of 9.1% p.a. compared to 12.3% p.a. for the global benchmark.  Allowing for franking credits on Australian dividends would further narrow this gap on a comparable gross or “pre-tax” basis.

That said, it’s traditional to benchmark local equity returns against unhedged $A returns from global markets – and on this basis, the difference again widens due to the decline in the $A in recent years.  Indeed, over this period, for example, the $A has fallen from $US1.03 to US78c.  Accordingly, in $A terms, the MSCI All-Country Index has delivered stronger price and total return gains over this period of 14.8% p.a. and 16.6% p.a. respectively. 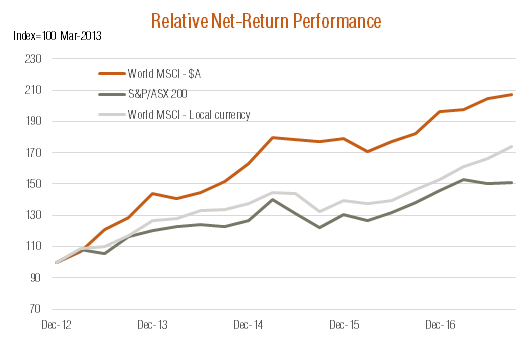 Two distinguishing characteristics of the Australian market appear to largely account for its relative performance over time. 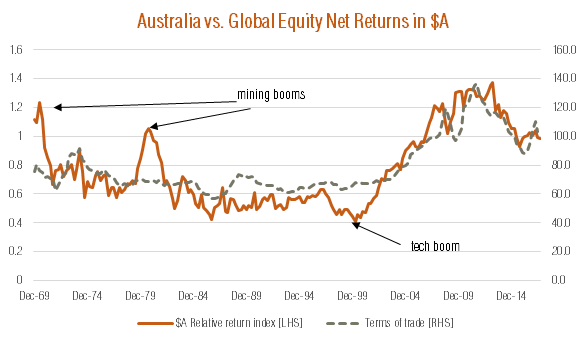 Source: Bloomberg. Past performance is not an indicator of future performance. Net $A return indices for the Australian S&P/ASX 200 and MSCI All-Country World Index respectively.

Two factors account for this strong relationship. First, a rising terms of trade tends to boost Australian corporate earnings (through the mining sector), which in turns helps Australian equity performance on a local currency (or currency-hedged) basis – and vice versa.

On top of this, a rising terms of trade also tends to push up the $A, which in turn reduces the unhedged $A returns for Australian investors from international markets – i.e. supports Australian equity outperformance on a unhedged $A basis – and vice versa.

Also evident in the above charts are two periods when Australia experienced a strong spurt of outperformance even though the terms of trade hardly moved – in both the early 1970s and early 1980s.  This appears to have reflected a speculative surge in mining sector prices based on commodity booms which never really materialised to the degree hoped.

A second factor that appears to help explain Australian relative performance is the popularity of the global technology sector – especially given Australia’s relatively low weight to this sector.  As seen in the charts above, Australia also tended to underperform in the late 1990s – even though the terms of trade were broadly stable – which coincided with the strong price performance of the global technology sector.  The Australian market then unwound this underperformance as global tech stocks subsequently declined.

Against this backdrop, it begs the question how the Australian market is likely to perform over the next year or so.  The answer would seem relatively straight forward – if you expect commodity prices to continue to edge down rather than up and for the global tech sector to continue to outperform (as I do) – then it would suggest the Australian market is also likely to underperform relative to global stockmarkets.

Australian investors concerned about potential Australian equity market under performance and/or are generally keen to obtain some international portfolio diversification can now do so easily and cost-effectively on the ASX using international equity exchange traded funds (ETFs).

One option that may be of particular interest, given its quite different sector composition to the Australian market and strong earnings outlook is exposure to the NASDAQ-100 Index via the BetaShares NASDAQ 100 ETF (ASX: NDQ).   NDQ gives investors access to leading global tech stocks such as Apple, Microsoft, Amazon, Facebook and Alphabet.