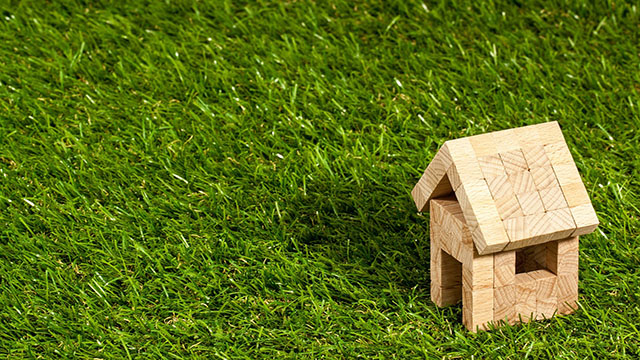 With the softening in Sydney home auction clearances rates in recent weeks and the surprise decision by Westpac to raise mortgage interest rates by 0.2%, there is growing concern about the outlook for property prices.  This note considers the fundamentals for the Sydney market – the current bellwether market – in particular.

A lot of ink has been spilt over the rise (and further rise) of Sydney property prices in recent years.  Some suggest the rise in prices reflects strong Chinese buying and the “internationalisation” of the Sydney market. Others suggest it’s a dangerous bubble and note the house price-to-household income ratio is well above long-run average levels.

The following chart puts the Sydney market in perspective.  As seen, the Sydney house price to household income ratio* was 7.3 in the June quarter, which is above its average of 5.7 since March 2004 and its previous peak of 6.7 in the December quarter 2003.  That said, at only 4.6%p.a., it’s also apparent that mortgage rates are also well below their average since March 2004 of 6.5%p.a..  Allowing for interest rates, the percent of average after tax income required to pay a mortgage on the median-priced home (assuming a deposit of 20%) was 40% in the June quarter, or only slightly above its average since March 2004 of 37%. In other words, virtually all of the increase in prices relative to income in recent years can be explained by the decline in interest rates.

Rightly or wrongly, households respond to lower interest rates – and the implied increase in mortgage affordability – by increasing the amount they are prepared to pay for a home. 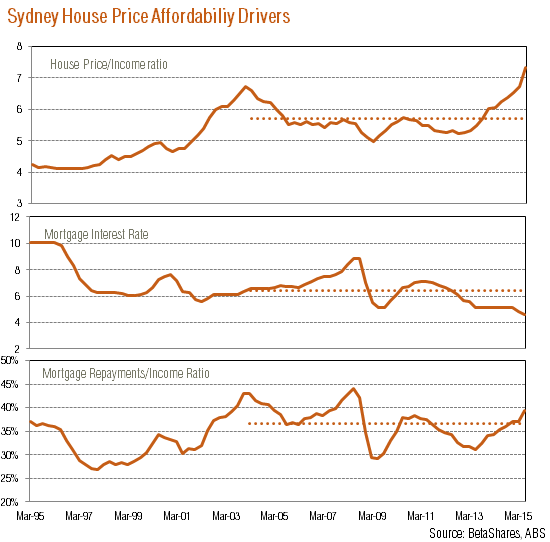 Associated with the rise in Sydney property prices has been a rise in housing construction – particularly for high rise apartments.  Some suggest this could cause a property glut. At this stage at least, however, the facts don’t support this view. As seen in the chart below, the rise in dwelling unit construction growth has also coincided with an acceleration in NSW’s population growth. Over recent years, it remains the case that annual NSW population growth has exceeded that of dwelling unit growth – as evident from a continued rise in the average number of residents per dwelling unit. 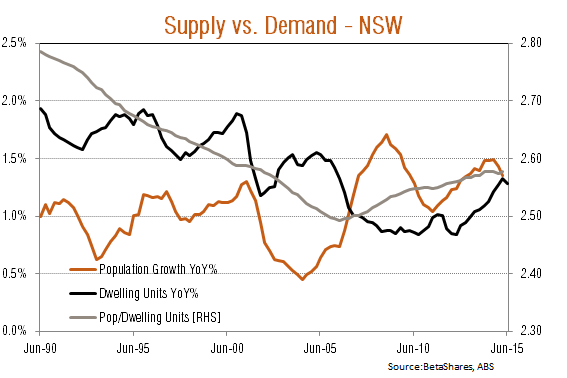 Of course, this analysis does not preclude the possibility that some pockets of the NSW market could well experience oversupply conditions. But across the States as a whole, evidence of excessive home building is far less apparent.

While Sydney property prices don’t appear overvalued given today’s low level of interest rates, they do however appear overvalued based on likely long-run average mortgage rate.  If mortgage rates were at their average of 6.5%p.a., for example, the Sydney mortgage repayment ratio would be 48% – even higher than previous peaks over the past decade or so. For the repayment ratio to be at its longer-run average of 37%, the median Sydney house price would need to be  $672,000, or 22% lower than the June quarter level.
While this presents a major challenge for the Sydney market going forward, it is not unprecedented.  So will this apparent over valuation be resolved?
As seen in the chart below, one obvious way would be via nominal price declines as and when interest rates rise.  As evident, nominal house price declines are by no means unusual for the Sydney market over recent years – with three corrections over the past decade or so, which each time tended to be associated with rising interest rates.  In each case, however, the peak to trough in house prices has been less than 10% – no doubt helped by the fact the overall economy has remained relatively strong. Indeed, the RBA is unlikely to consider raising interest rates until such time as the economy is strong enough to bear it. 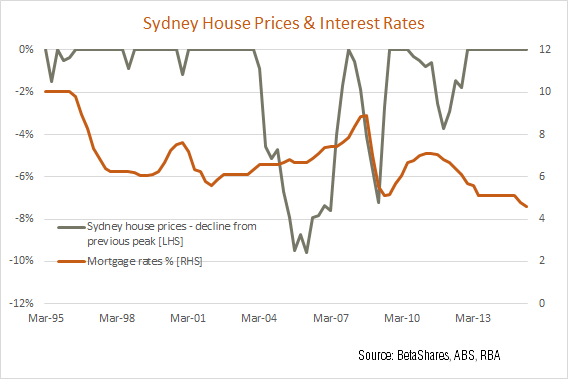 The other way Sydney’s “over valuation” could be resolved is through a period in which growth in household incomes outpace property prices for a time.  For example, if NSW household incomes grow by 3% pa over the next decade, and mortgage rates rise to 6.5%, then house prices could still crawl ahead by 0.4%pa over this period and still leave the mortgage repayment ratio at its long-run average of 37%.

This analysis suggests that while Sydney property prices are not unreasonably high given the low level of interest rates,  they are up to 30% overvalued relative to long-run “neutral” interest rates. This overvaluation will likely be corrected through a nominal house price correction when interest rates eventually  rise, and under performance relative to household incomes over coming years.
Importantly, however, barring a large rise in interest rates and/or unemployment – which are unlikely to happen at the same time – Sydney house prices need not “crash.”

*Median (unstratified) house price as estimated by the Australian Bureau of Statistics (ABS) in its quarterly Residential Property Price Index publication. The ABS estimates a median Sydney house price of $871,000 in the June quarter 2015.  Household income is estimated as NSW after-tax income for male and female both working full time and average full-time earnings as estimated by the ABS. Our calculations suggest NSW after-tax average household income in the June quarter on this basis was  $119,000.  The mortgage interest rate is the average discounted bank variable mortgage interest rate as calculated by the Reserve Bank of Australia.