Global equities pushed higher last week despite a continued U.S. impasse over further fiscal stimulus. Talk of a Russian vaccine and still generally encouraging U.S. economic data helped keep equity bears at bay. The risk-on sentiment was also evident in a spike in bond yields, correction in gold prices, and a still soggy $US. The S&P 500 touched an intra-day record high, and ended the week within a whisker (0.2%) of its mid-February peak.

Data-wise, U.S. jobless claims were a bit better than expected for a change, finally breaking below the 1 million mark. July U.S. retail sales were slightly weaker than expected, but still not bad – rising 1.2% – which still leaves sales miraculously higher than pre-COVID levels. Thanks to huge household income support, U.S. retail sales (along with sales elsewhere, even Australia) have clearly enjoyed a V-shaped recovery so far, even with employment levels still well below their peak.

Chinese data revealed their economy also continued to enjoy a V-shaped recovery in industrial production in July (thanks to traditional pump priming through infrastructure projects) though retail sales continued to lag somewhat. This in turn is helping keep iron-ore prices and the $A aloft.

This week’s focus will again be on whether Washington can come to a deal on extending unemployment benefit payments, rather than rely on the legally dubious executive orders that President Trump has issued so far. Along with the recent spike in COVID-19 cases, a premature tapering of this income support risks slowing America’s economic rebound – but so far at least Wall Street remains confident a fiscal deal will be struck and/or the Fed will ride to the rescue with even more monetary firepower.

Minutes of the latest Fed meeting are released on Wednesday, which could shed light on how much closer it is to unleashing more stimulus. On Friday, U.S. August manufacturing and non-manufacturing indices should depict an economy continuing to recover. Also in focus will be the tail end of the U.S. Q2 reporting season, with major retailers such as Walmart set to reveal their results (which should overall be fairly encouraging given the strength in retail sales).

The S&P/ASX 200 rose solidly last week to be at the top-end of the sideways range that has been evident since early June. Is this the week of the breakout? Maybe, but we’ll likely need to see investors get a lot more comfortable with banks, despite rising bad loans and falling dividends.  Unlike the S&P 500, our market is still around 15% from its previous peak, dragged down by financials and not helped by our relatively low exposure to the booming technology sector.

That said, while it’s still early days, the reporting season so far can at least be characterised as “not as bad as feared”.

Local data last week was also somewhat encouraging, though undermined by the fact it largely pre-dated Melbourne’s renewed lock down. Employment rose by 114k in July, after a 228k gain in June, meaning around 40% of the jobs lost due to COVID-related shutdowns have already been recovered.  The National Australia Bank index of business conditions also strengthened further in July, to be almost back to pre-COVID levels, though the more flighty confidence index corrected back. Capacity utilisation and forward orders also remain well below pre-COVID levels suggesting, along with Melbourne’s shutdown, it’s too early to bring out the champagne.

Regarding interest rates, in a notable upgrading of ‘forward guidance’, RBA Governor Lowe indicated in a speech last week that “given the outlook I discussed”, official interest rates are unlikely to be increased “for at least three years”. I suspect the RBA won’t wait that long, as I’m warming to the view that growth will bounce back better than expected in 2021 (assuming a vaccine is available by early next year). In the meantime, however, there’s still a risk of a further edging down in the rate to 0.15% or so if renewed COVID restrictions cause the recovery to stall.

Either way, RBA minutes to the latest meeting are released on Wednesday, and July retail spending on Friday. The earnings reporting season also rolls on. 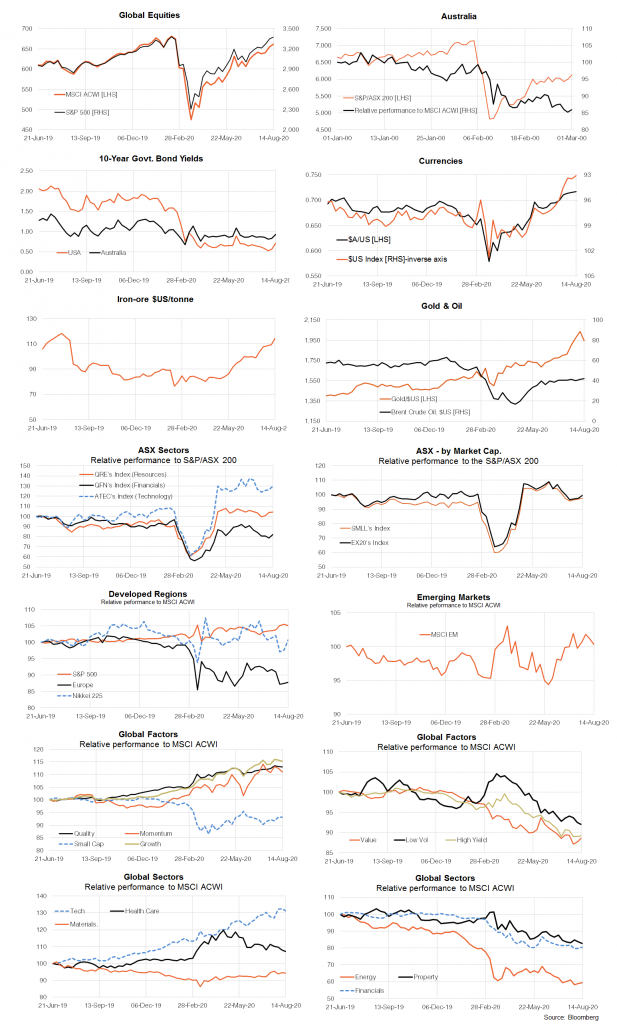