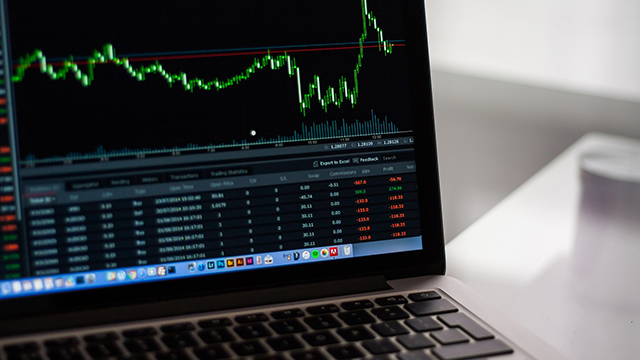 The rise in global equity prices in recent years has led to continued concerns over valuation levels.  One indicator that appears to cause endless nervousness is the so-called “Shiller” PE ratio, which considers US stock prices relative to the rolling 10-year average level of earnings.  As this note demonstrates, however, the Shiller PE ratio has proven to be a poor short-run market timing tool.  And while it has proven to be a reasonable guide for likely longer-run returns in the past, allowance today needs to be made for the large structural decline in interest rates.

The Shiller PE Ratio is high

Made famous by Nobel-prize winning economics professor Robert Shiller, the so-called “Shiller” or “cyclically adjusted” PE ratio (SPER) compares the level of US share prices to the 10-year moving average level of earnings.

The indicator has proven popular in recent decades, after Shiller used the analysis during the dotcom bubble period to suggest the market was overvalued and lower returns could be expected over coming years – he was eventually proven right! 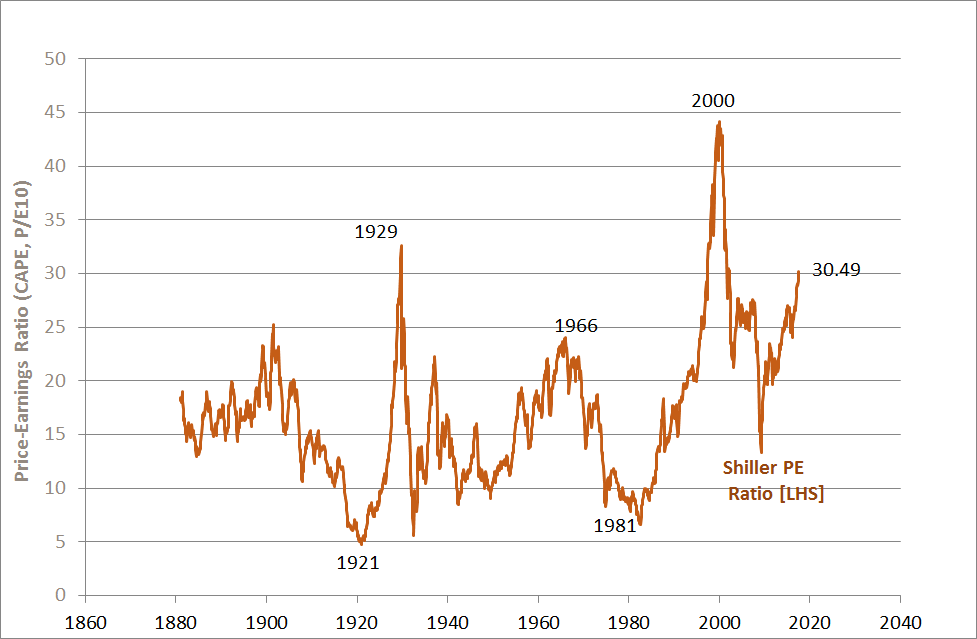 But it’s not a great market timing tool

Does this mean the market is about to crash?  As seen in the chart below, the SPER has tended to be above average for the much of the past two decades.  Indeed, it continued to rise for an extended period through the late 1990s bull market, and hovered above 25 for most of the commodity-driven bull market prior to the financial crisis.  As a short-run market timing tool, the SPER has not been much help! 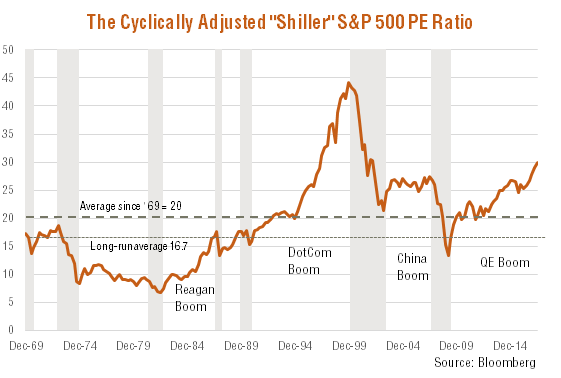 The longer-run outlook for stocks is potentially more sobering

The SPER has had better success as an indicator of longer-run likely returns.  As seen in the chart below, relatively high levels of the SPER have tended to be associated with relatively low real share price returns over the following 10-year period.  Indeed, the last three times the SPER hit 30 (back in the late 1920s and again twice during the dotcom bust), subsequent 10-year real share prices returns were negative.   That does not bode well for likely US share price returns over the coming decade! 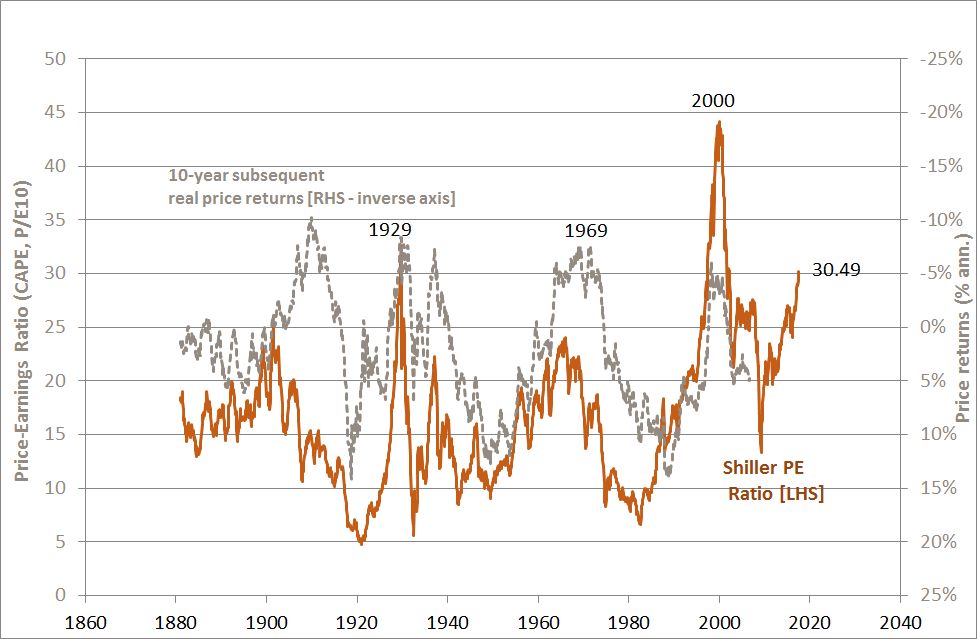 That said, one complicating factor in extrapolating past historical patterns is the huge cycle in interest rates that has been experienced over the past 50 years.  As seen in the chart below, equity markets faced the headwind of rising interest rates from the 1960s to the early 1980s, only to then enjoy the tailwind of falling rates for the past 35 years. 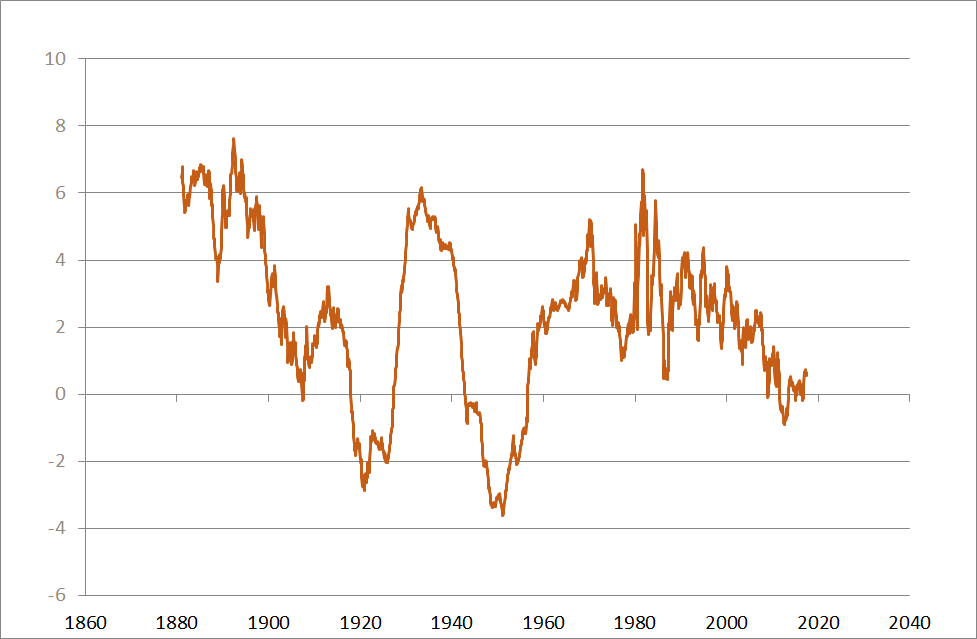 As seen in the chart below, if we invert the SPER to generate a “Shiller earnings yield” and compare this to real bond yields from the chart above, current equity market valuations then appear less troublesome.  Indeed, the Shiller earnings-to-bond yield gap is currently around 2.7%, compared with a long-run average (since the late 1880s) of 4.7%.  Note, moreover, past periods of particularly weak 10-year real share returns (in 1929, 1966 and 2000) were associated with earnings to bond yield gaps closer to zero. 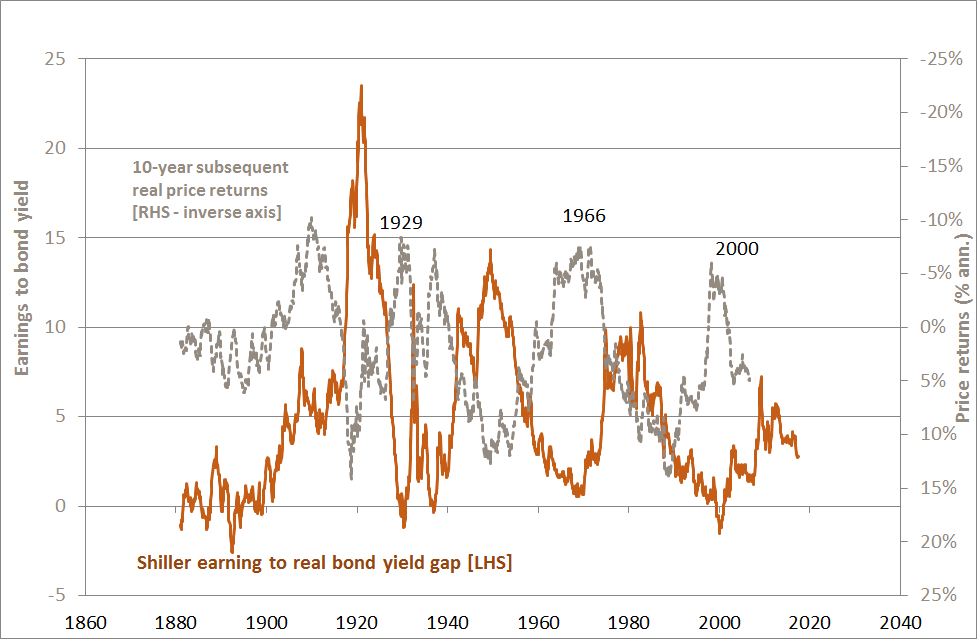