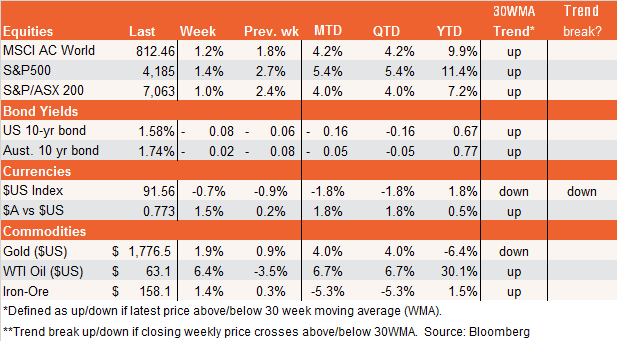 Another week, another rise in global equities it seems – helped on by ongoing solid economic growth and, most recently, a reassuring pullback in global bond yields. Indeed, last week’s much anticipated U.S. consumer price index report came and went without a murmur from the bond market. While annual growth in headline consumer prices pushed above 2% as expected (reflecting the rebound in oil prices over the year), core inflation (excluding food and energy) lifted only modestly from 1.3% to 1.6%. Also reflective of better bond market sentiment, a series of U.S. Treasury bond auctions last week attracted solid interest.

Note the easing in bond yields came despite continued unquestionably strong economic data, with U.S. weekly jobless claims dropping to 576k (market expectations 700k) and (thanks to stimulus cheques and better weather) March retail sales bouncing back much more than expected. In the first peek at April data, the Philadelphia manufacturing index (the ‘Philly Fed Index’) spiked to its highest level since 1973!

One cloud on the horizon was new question marks over vaccines, with some countries pausing their rollout to further investigate cases of blood clotting. While clotting appears very rare (6 U.S. reports out of 6.8m vaccinated, or 0.0001%), the U.S. at least wants to establish who might be most vulnerable and what are the best procedures to deal with this side-effect. But if this was a reason for the decline in U.S. bond yields last week, it certainly did not stop Wall Street setting new records.

Last but not least, the U.S. Q1 earnings reporting season has started off well – with major banks beating expectations. In terms of the week ahead, developments on the vaccine front will be keenly watched while the U.S. earnings season also steps up in earnest, with leading companies such as Netflix and IBM reporting. U.S. April service and manufacturing indices are also released, and are expected to remain at very high levels. 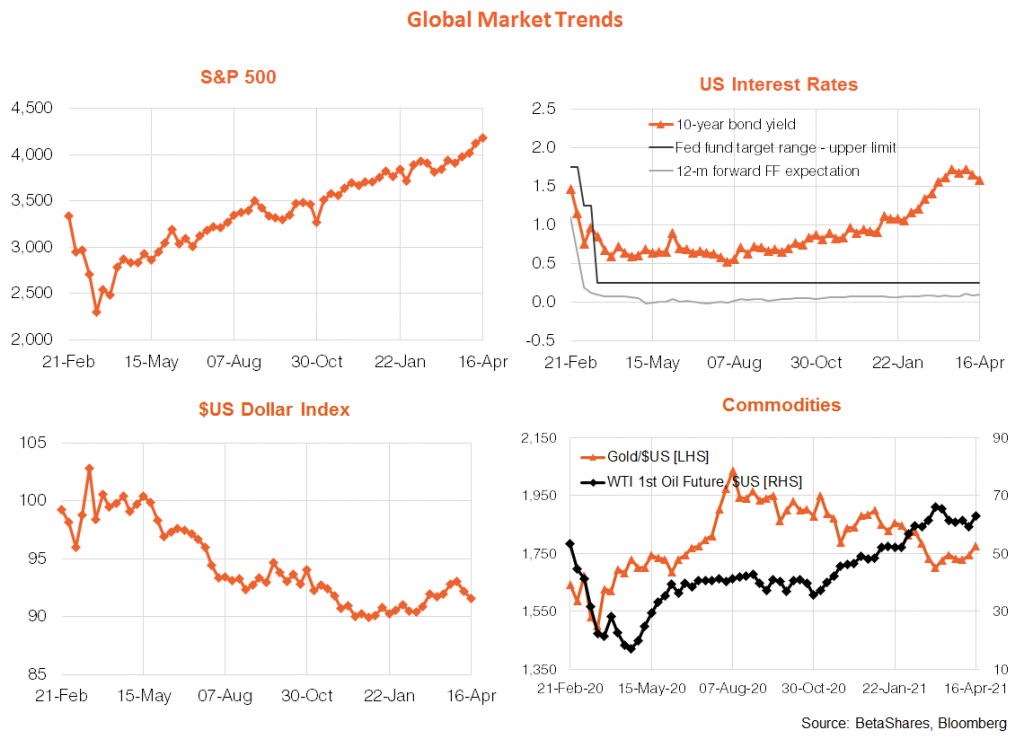 Apart from supporting equities, the decline in bond yields has taken the edge of the $US over the last two weeks and breathed new life into gold prices. As I suspect bond yields will be largely range-bound from here (rather than trending lower), it’s also hard to get especially bullish on gold prices.

Japanese post-COVID outperformance continues to come off the boil with the U.S market strengthening. Emerging markets also failed to outperform again last week despite a weaker $US, while lower bond yields helped growth marginally beat out value for the third week in a row. 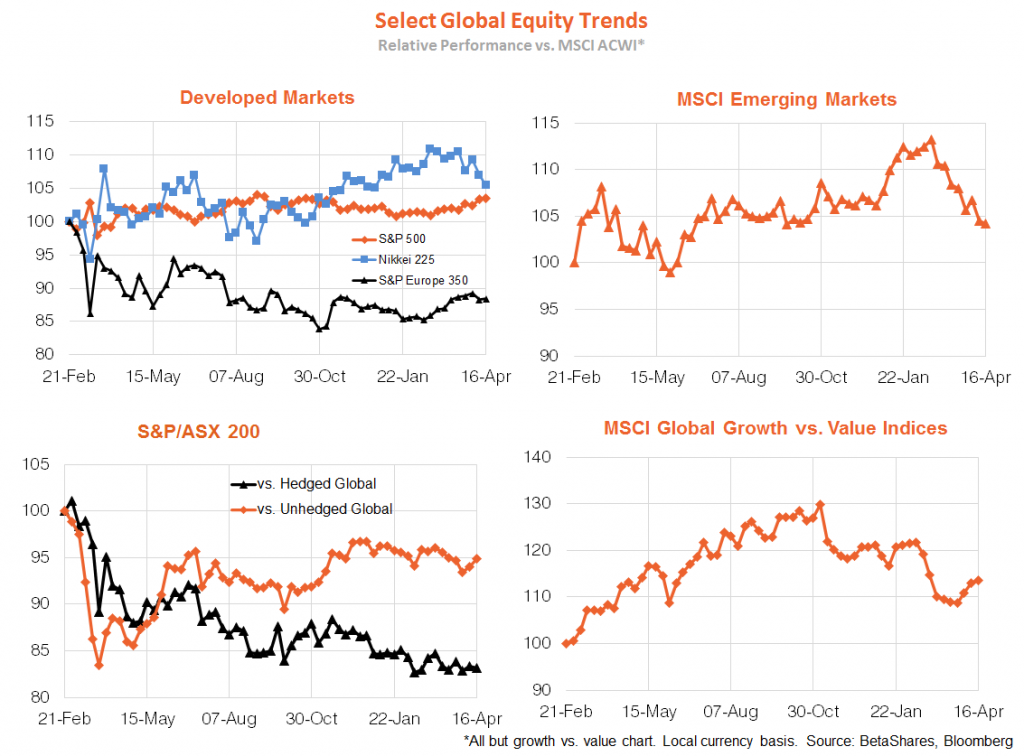 Local economic data last week was also resoundingly strong, with business and consumer confidence indices hitting high levels and employment bounding back further in March. The unemployment rate dropped to 5.6%, which is now only 0.5% below the pre-COVID level of 5.1%. With hiring intentions still quite strong, the economy appears well-placed to withstand this month’s removal of JobKeeper.

In terms of key trends, lower bond yields and upbeat data has allowed equities to break out of their recent range, with growth exposures such as technology favoured. The easing in the $US has also helped the $A rebound somewhat. 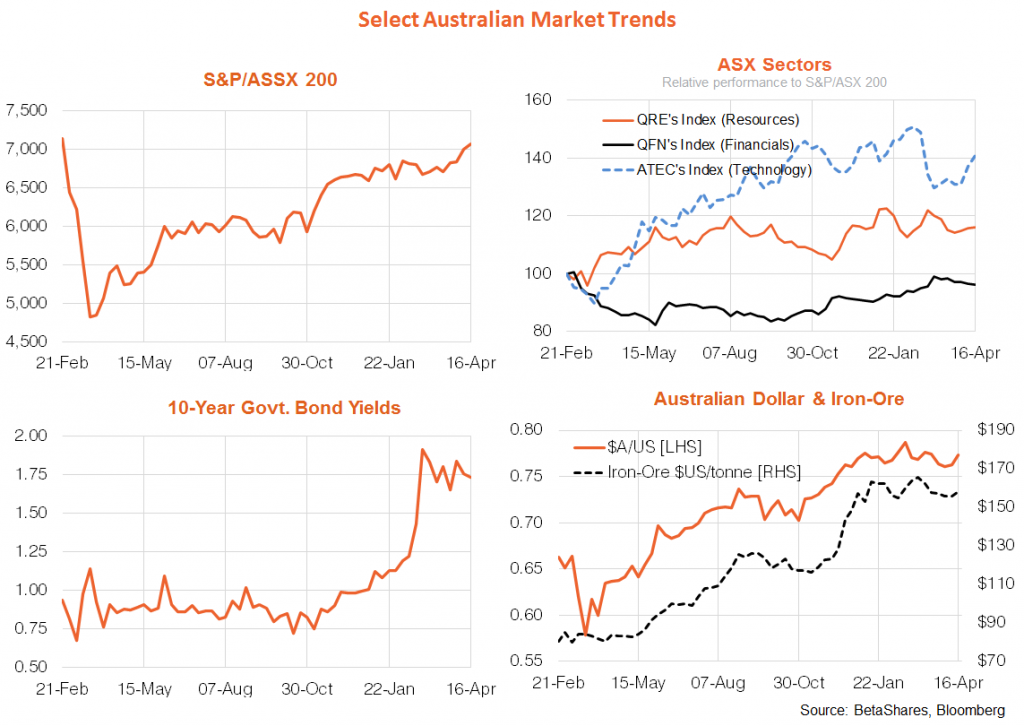 In terms of the week ahead, March retail sales on Wednesday should show a modest rebound though overall retail sales in Q1 so far have been held back by rotating mini-lockdowns across several States. (As an aside, I was shocked and disappointed by the haphazard way COVID tracing apps were being used across venues during my visit to Melbourne last week – with small businesses seemingly free to use their own cumbersome identification apps, compliance with which was rarely checked. If the rest of the nation can’t understand why contract tracing is so hard in Victoria (and why the state seemingly needs to close down every time it gets a handful of cases) this to me seems why.)

Also potentially of some interest this week will be the minutes of the RBA last policy meeting, and in particular the extent to which Board members expressed concern over house prices.