As expected, the IMF last week downgraded its global growth forecast for 2019 and suggested there remains downside risks.  That said, it’s still anticipating a second half rebound in growth, helped by policy stimulus in China and some recovery in beleaguered emerging markets such as Argentina and Turkey.

Japan should improve as the negative impact of last year’s natural disasters wane, as should Germany once its car makers fully adjust to new fuel emission standards.

It’s also hoped Italy can deal with its budget problems and spur stronger growth this year, and greater clarity will emerge with regard to Brexit. US growth meanwhile seems likely to hold up OK, albeit slow back toward potential as the impact of last year’s tax cuts wane.

Of course, this tentatively encouraging outlook is also predicted on current global trade tensions not getting much worse, and tightening labour markets not leading to either higher inflation or slumping corporate profits and investment.

In other news, rhetoric from the Fed last week suggested it retains a fairly neutral outlook, and is certainly less convinced of the need to cut interest rates anytime soon than is either President Trump or financial markets.  Data wise, the Goldilocks fairytale continued, with US core inflation remaining benign and weekly jobless claims plumbing new lows.

That said, the biggest near-term risks to equity markets are the weakening US earnings outlook and indications that Trump may want to start a new trade war with Europe. With the latest US earnings reporting season just beginning, markets have already priced in negative annual growth, but – so far at least – expect earnings to miraculously recover later this year. Markets were buoyed on Friday by a better than feared early earnings report from bellwether JP Morgan, but there’s a lot more news to come over the next few weeks.

In Australia, meanwhile, Deputy RBA Governor Guy Debelle also reiterated the Bank’s neutral “wait and see” mode, noting that several key labour market indicators are still holding up well despite a weak outlook for housing and GDP growth.  Local data was mixed, with a bounce in home lending during February though a further drop in ANZ job ads in March.

Key readings on US industrial production, retail sales and housing starts this week, should suggest the world’s largest economy continues to hum along nicely.  China’s monthly “data dump” on Wednesday, moreover, may also reveal some signs of economic improvement in response to recent policy easing.  The drumbeat of US earnings reports will also buffet Wall Street, and traders will keep careful watch of any escalation in trade tensions between the US and Europe.

In Australia, the week’s highlight will be Thursday’s labour force report, which should continue to indicate reasonable jobs growth given there’s been (as noted by Guy Debelle) only modest deterioration in key hiring indicators so far.  Oh, and there’s a Federal election on! 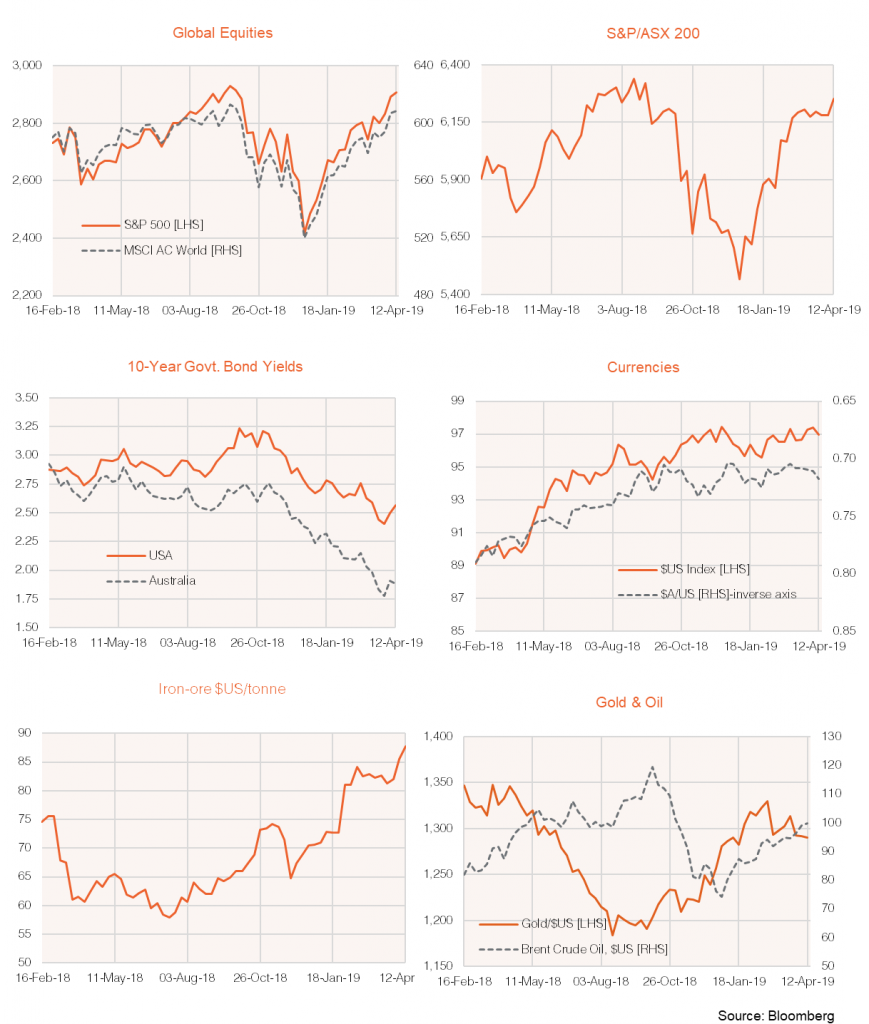