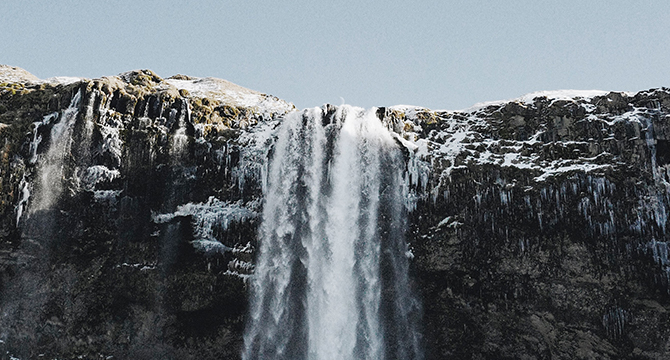 Global equities had their first monthly negative return since bottoming in March, reflecting a shakeout in the high-flying U.S. technology sector. Despite the risk-off equity sentiment, gold prices also fell back (and commodities more generally), which likely reflected a rebound in the ‘safe-haven’ $US. Already very low global bond yields hardly budged either way.

Despite these ‘counter-trend’ moves in September, as seen in the chart set below, global bond yields and the $US remain in a medium-term downtrend, with global equities and gold prices in an uptrend*. 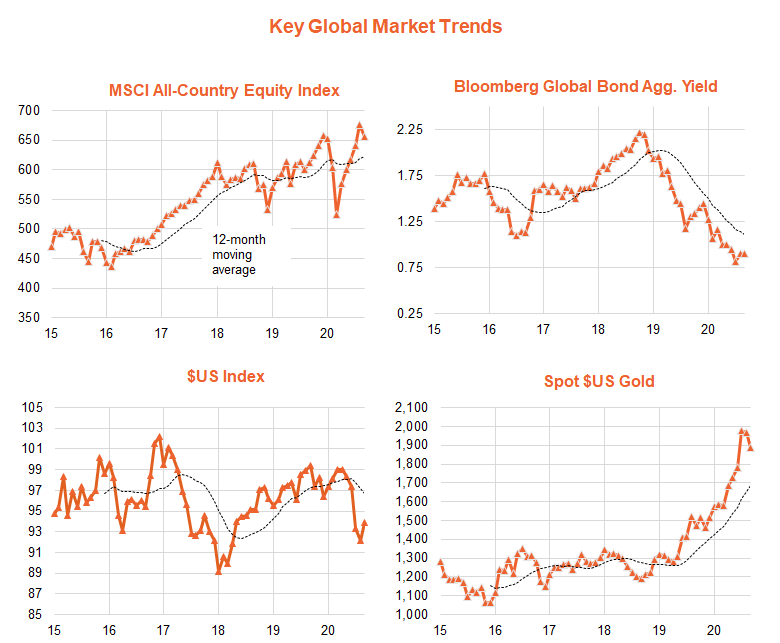 Let me offer a couple of new charts this month – breaking down the key fundamental drivers of the most important equity index in the world, the S&P 500.

As seen in the first chart below, the S&P 500 ended September trading at a price-to-forward earnings (PE) ratio of of 21.3 – which is a bit lower than the levels seen in recent months, due to both the correction in prices and a modest lift in forward earnings. As evident, 21.3 is well above its long-run average level but to an extent reflective of the very low level of bond yields – with the U.S. 10-year government bond yield ending the month at only 0.7%.

Econometrically drawing a ‘line of best fit’ through the monthly levels of interest and PE valuations stretching back several decades (granted a crude valuation metric), suggests a PE ‘fair value’ at end-September of 19.9, or 7% below the actual level. Given the loose relationship evident in the chart, however, this degree of valuation is not that extreme – and somewhat less stretched than at end-August. 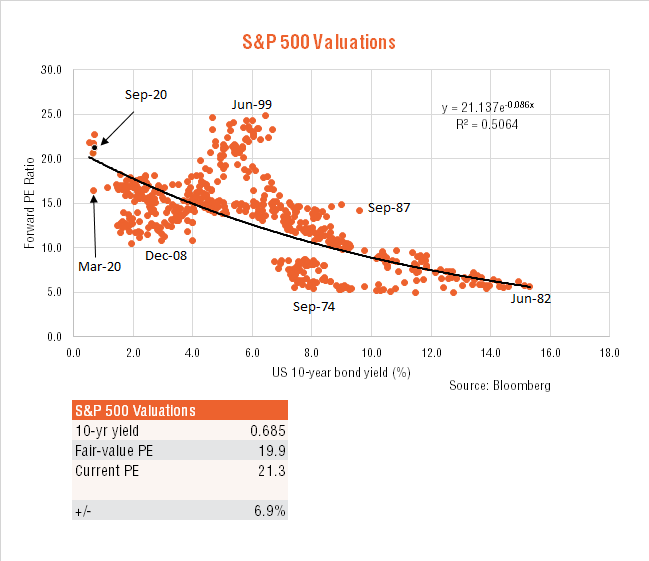 The chart below shows that while earnings expectations were downgraded significantly earlier this year (reflecting the economic lockdowns) they have since stabilised, and in fact increased a little. Based on current market expectations, U.S. forward earnings are on track to rise by 23% between now and end-2021, which (at end-September prices) would pull down the PE ratio to a more reasonable 17.3. Even allowing for moderate further downgrades (my estimates in the table below) could still see forward earnings rise by 14% over this period, with the market trading at an end-2021 PE ratio of 18.7. 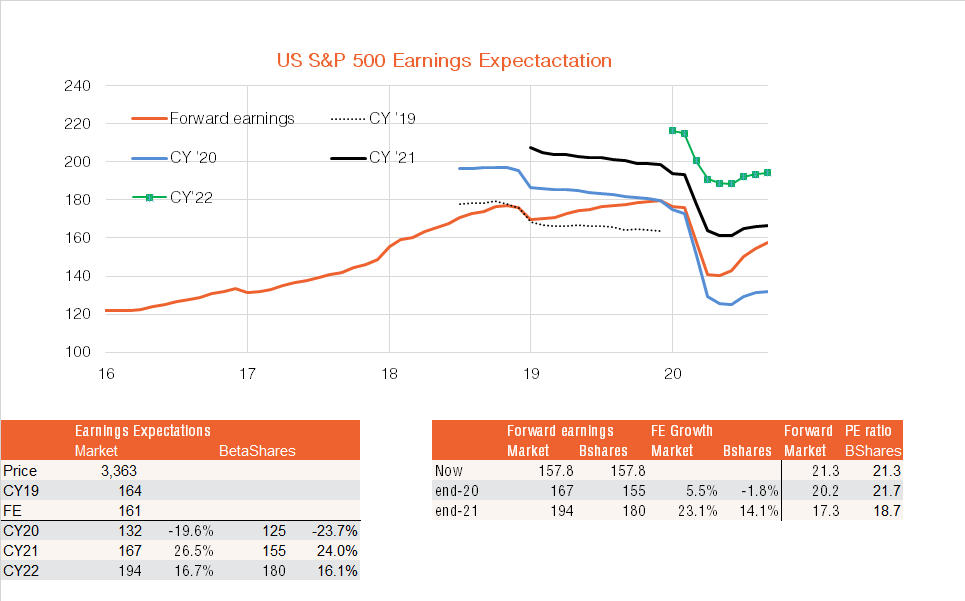 All up, this analysis suggests the U.S. market could hold up if the economic recovery continues and bond yields stay reasonably low – but significant further upside could be limited, given the prospect of some eventual lift in bond yields and an already fully valued market.

As seen in the table below, it was the popular U.S., technology and growth/momentum themes that suffered the biggest pullbacks in September, though financial, energy and ‘value’ stocks more broadly also had notable declines. Being only the first month of a potential ‘counter-trend’ equity rotation, the relative performance rankings of the long popular U.S., technology and growth/momentum themes remain in place. 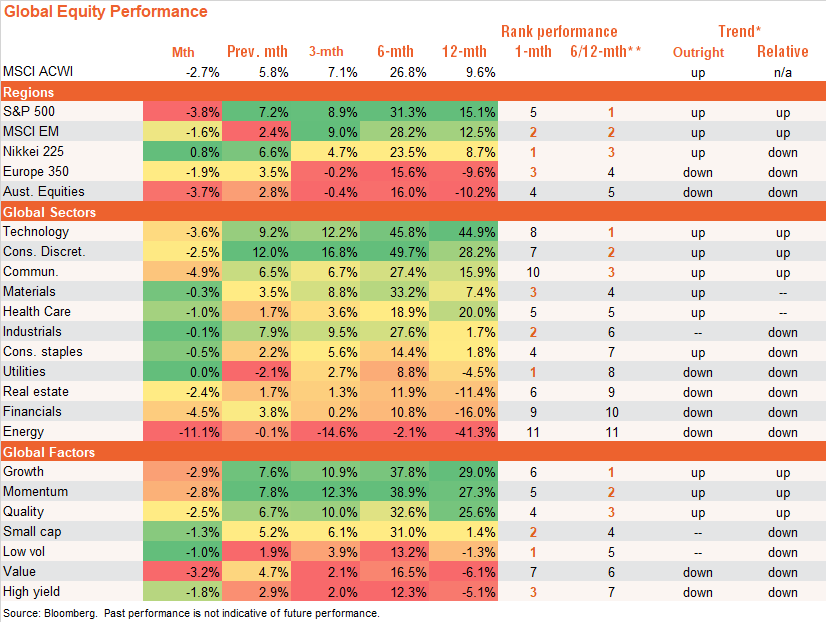 Tables ordered by 6/12 month return performance for each region, sector and factor respectively – on a local currency basis. Past performance is not indicative of future performance.  You cannot invest directly in an index.

Among the global currency-hedged funds***, both growth and value-related exposures suffered declines, ranging from the worst performer FUEL (not helped by the drop in oil prices) to financials (BNKS), gold miners (MNRS) and the tech heavy NASDAQ-100 (HNDQ). Other recent strong performers that held up well, however, include global quality (HQLT) and health care (DRUG). 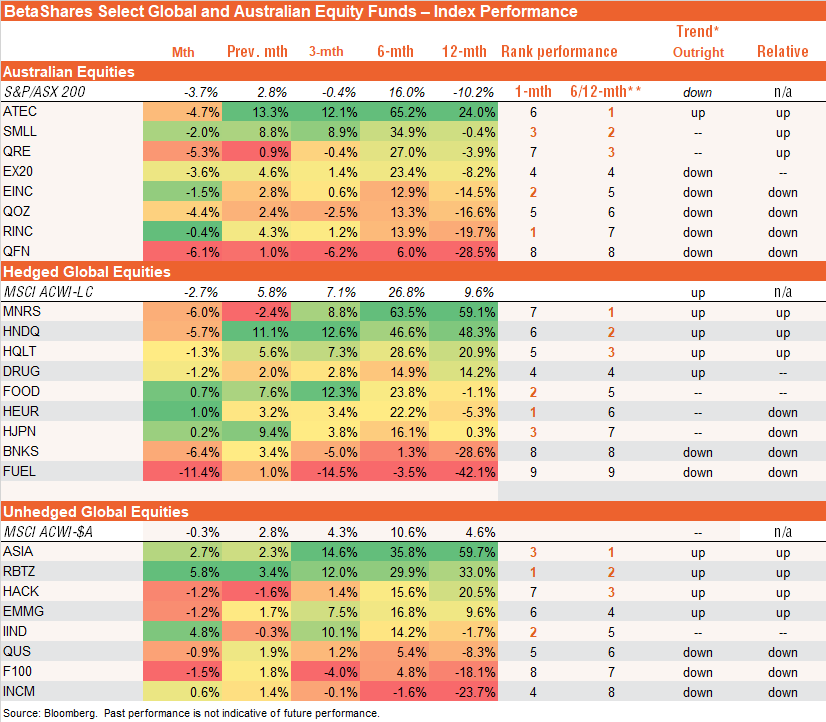 Tables ordered by 6/12 month return performance for each region, sector and factor respectively. Past performance is not indicative of future performance of the index or fund.  You cannot invest directly in an index. Index performance doesn’t take into account any fund fees and costs.

Source: Bloomberg. Past performance is not indicative of future performance of the index or fund. You cannot invest directly in an index. Index performance doesn’t take into account any fund fees and costs.