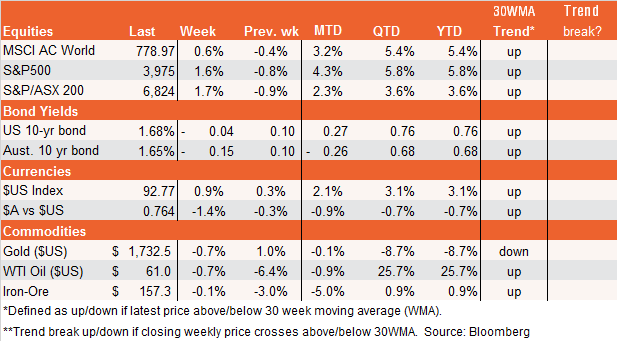 Despite new lockdowns in Germany, risk-on sentiment improved last week thanks to a stablisation in bond yields, U.S. inflation relief, further progress in the U.S. vaccine rollout, and new freedoms for U.S. banks to pay dividends and buy back stock.

U.S. Fed chair Powell spoke several times last week and continued to reiterate that while inflation may pick up in the next few months (for technical reasons as explained last week) it should slow back down again thereafter and the Fed still has no intention of tightening policy for some time. That seemed enough to cap bond yields, with the U.S. 10-year rate easing back 4bps to 1.68%. Helping ‘value’ sectors like financials, moreover, was the Fed’s Friday announcement that banks are now strong enough to be allowed to pay dividends and buy back stock once again.

With 100 million now vaccinated, U.S. President Biden also upped the ante last week – pledging to have a further 100 million vaccinated within the next few months. In Europe, meanwhile, COVID is still wreaking havoc, with Germany announcing a hard 5-day lockdown over the Easter period and France seemingly on the verge of something similar. More attractive U.S. bond yields and America’s recent relative success in dealing with COVID is perhaps one factor behind renewed strength in the U.S. dollar of late. Also providing some relief to markets on Friday was the U.S. consumption deflator, which revealed core consumer price inflation remained relatively benign in February – with the annual rate dipping to 1.4% from 1.5%. That said, the annual rate is anticipated to jump to 2% next month, reflecting a very low monthly result in March last year.

In terms of key global trends, the overall S&P 500 Index continues to grind higher, while the U.S. dollar has firmed of late. Gold remains weak while the uptrend in oil prices has been checked in recent weeks. Bond yields eased last week, but it’s too early to suggest the strong lift in recent months has run its course. 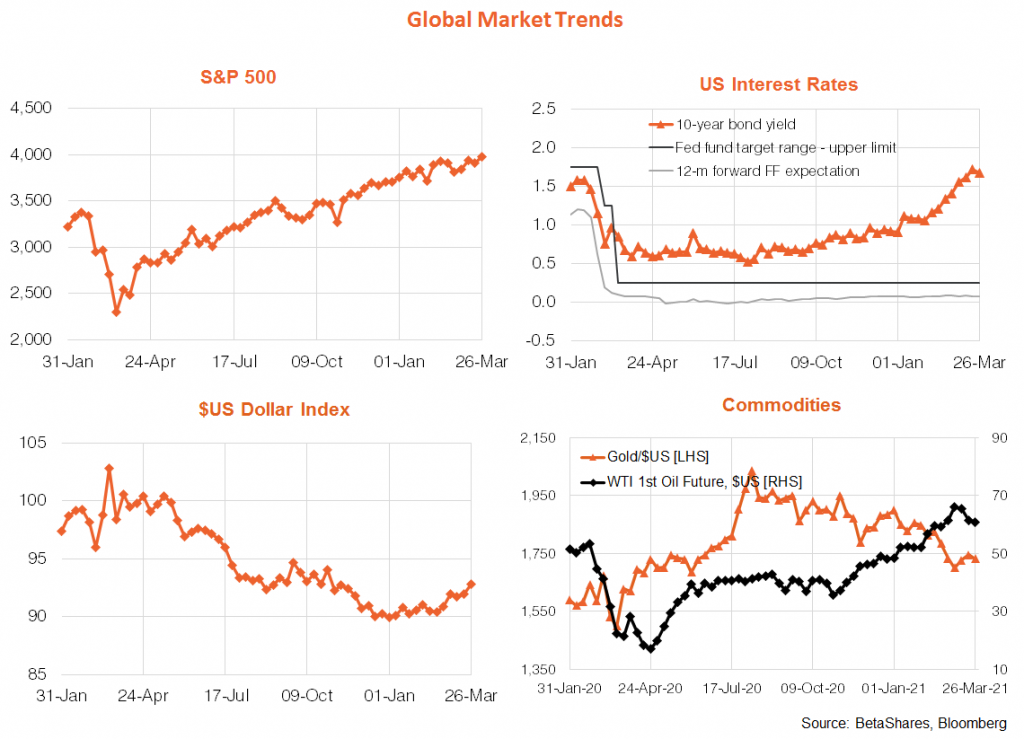 The major highlight globally this week is expected to be U.S. March payrolls on Friday. After bad weather contributed to softer U.S. economic reports over February, the payrolls report is likely to show a strong rebound in March – with a bumper 600k new jobs expected, with the unemployment rate declining from 6.2% to 6.0%. Markets will be torn between cheering the strong economy and worrying about the potential inflation fallout.

In terms of global equity trends, the strength in the U.S. dollar and Chinese policy tightening has seen a notable retracement in emerging market relative performance in recent weeks. Relative developed market performance remains choppy. Value is still beating growth, but the relative gains have slowed a little in recent weeks. 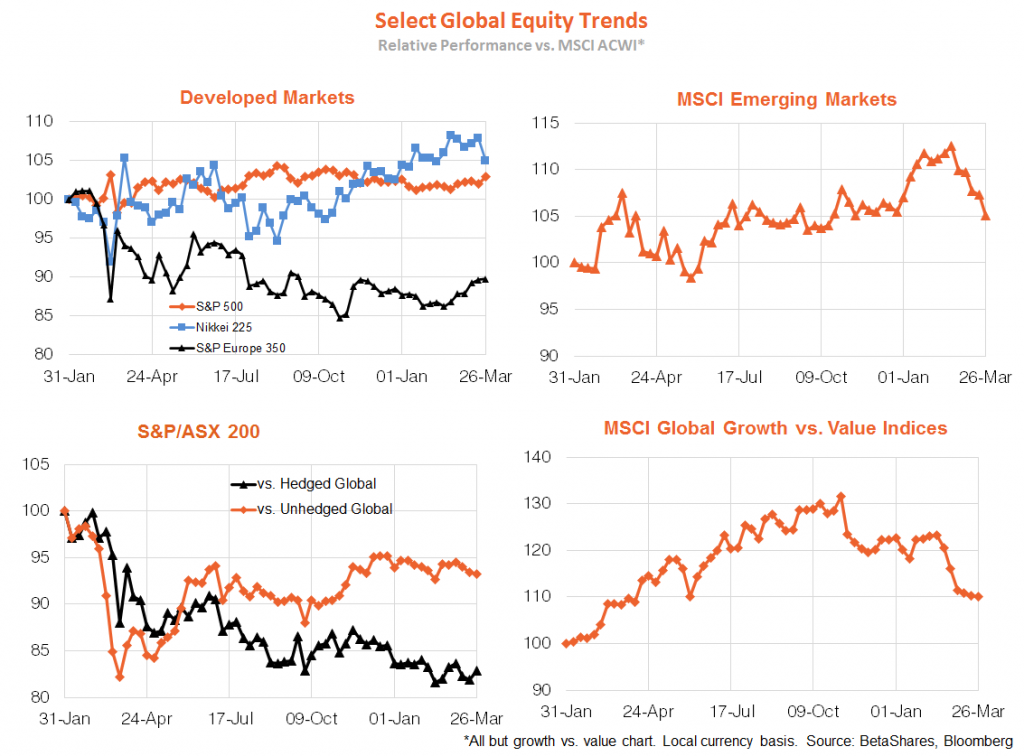 There was little new fundamental news last week, through a survey by the ABS suggested around 10% of businesses still benefiting from JobKeeper may cut staff once the program ends this week. That suggests around 100k may be looking for work, which could result in a few months of softer labour market results. All up, however, I agree with the (apparent) consensus that these extra workers should be readily absorbed given solid economic momentum.

Meanwhile, the lift in local stocks last week was not enough to push them beyond their sideways range of the year so far, but I suspect pressure for an upside breakout is building. Bond yields have fallen back in recent weeks after their near vertical ascent from mid-February to early March – though they still remain well above levels at the start of the year, despite the RBA’s best jawboning efforts. The $A has come under some downward pressure reflecting a levelling off in iron-ore prices and global $US strength. Financials have continued to perform reasonably well – relative to resources and technology – over recent weeks. 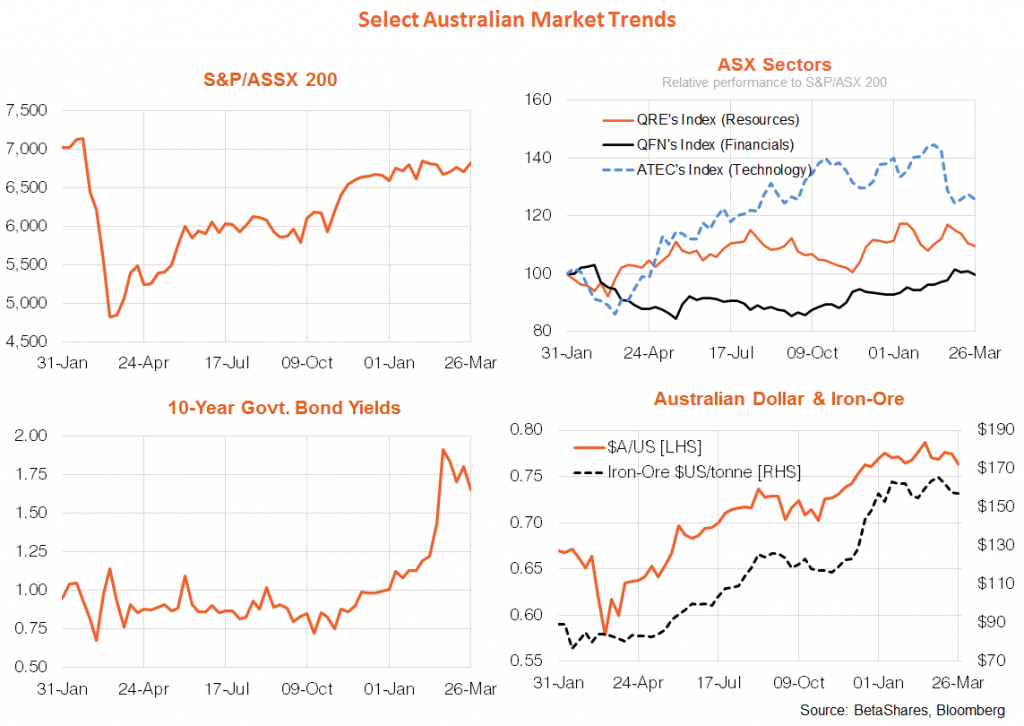 Retail sales and building approvals are the local data highlights this week on Thursday. All up, these are likely to show consumer spending remains solid and the housing sector continues to enjoy a solid demand upswing.