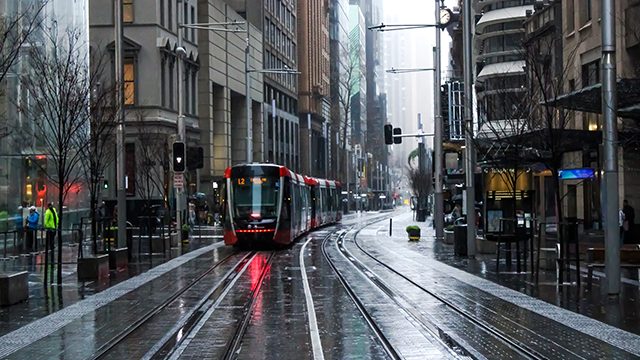 By global standards, Australia has so far managed to contain the COVID outbreak fairly well. Given that debate still rages over whether rolling lockdowns and border closures have been justified on a cost-benefit analysis, I though it might be useful to at least gauge what we have potentially achieved by our containment efforts to date.

Australia’s exposure to COVID has been low by global standards

As seen in the chart below, on average around 4 to 10% of the population of some of our major peer countries have been reported as having contracted a COVID variant*. In the U.S. and United Kingdom, for example, around 35 million and 5 million respectively have been reported as having contracted COVID, which equates to 10.4% and 7.3% of their respective populations. 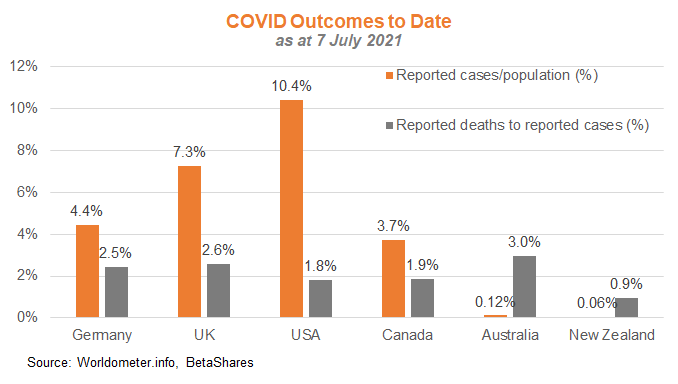 Our reported death rate has not been especially low

On average among these peer countries, the ratio of reported COVID deaths to COVID cases is around 2.2%.

In Australia to date it is somewhat higher at 3%. Australia’s moderately higher death rate may reflect the fact that, so far at least, we have stopped COVID reaching the broader (and healthier) population. But, that said, we still don’t appear to have been especially good at protecting the most vulnerable (for example, 75% of deaths in Australia have been aged-care residents). Indeed, in NZ, where the incidence of COVID across the population has also been low, the ratio of deaths to reported cases is only 0.9% – one third that of Australia.

Either way, had Australia experienced the average ratio of COVID cases to population of our international peers (6.5%), 1.625 million of us would been reported as having contracted COVID. And if 2.2% of those reported cases died – again the average among our international peers – it would have implied total Australian deaths of 35,313 – compared to the 910 people we’ve had to date. That is a saving of 34,403 people – largely because of the contained virus spread.

Of course, this is only an estimate of the benefits of COVID containment – not the costs. A proper cost-benefit analysis would need to estimate the potential loss of life from lockdowns themselves, through a variety of reasons – such as reduced access to health services and even suicide. There are of course the harder to estimate mental health costs to those who have faced unemployment or business failure, along with broader financial costs to the economy overall.

That said, the evidence to date suggests overall estimated deaths since the COVID crisis began are not significantly above long-run averages, in part because social distancing has also helped reduced seasonal deaths through the flu. Official national suicides rate are not yet available – while there are reports of an increase in attempted suicide among some younger age groups, NSW at least has suggested the number of suicides last year was down on 2019 levels.

It’s also fair to say Australia’s economy has performed reasonably well by global standards over the past year – we’ve enjoyed our own ‘V-shaped’ recovery – while still recording far fewer COVID cases and deaths than some of our international peers. As RBA Governor Phillip Lowe recently noted, Australia (and New Zealand) were, as at 17 June 2021, the only advanced economies to have restored total employment to pre-COVID levels. As the May Federal Budget noted, GDP last year fell by just over 2%, less than in many peer economies such as the United States and the UK, and compared to an overall global GDP decline of 3.3%.

So, at least by international standards, the economic costs of our COVID containment policies don’t appear especially large.

Of course, another aspect of cost-benefit analysis is whether the same benefits of reduced deaths could have been achieved at lower cost – such as better targeted measures, like ensuring all those in aged-care were vaccinated as quickly as possible, not to mention aged-care staff and those involved in hotel quarantine or the transport of airline staff. Were state/city-based lockdowns the most efficient way of saving 34,000 lives?

In terms of costs versus benefits, I can only leave that to others to debate. The main purpose of this analysis was to show that, at least by global standards, Australia’s COVID approach – while arguably not as efficient as it could have been – appears at least to have saved many thousands of lives. And so far at least, the economic and human costs don’t appear to have been especially large compared to that evident among our international peers.

*All of the above analysis is based on reported cases and deaths on Worldometers.info, which in turn source national organisations and the World Health Organisation (WHO). Although question marks remain over potential under-reporting of COVID cases and/or over-reporting of COVID deaths (some may have died due to pre-existing conditions) it’s likely that these biases have been evident in all countries to a degree. As a result, international comparisons of relative performance based on official data seems reasonable – it’s also our only choice!