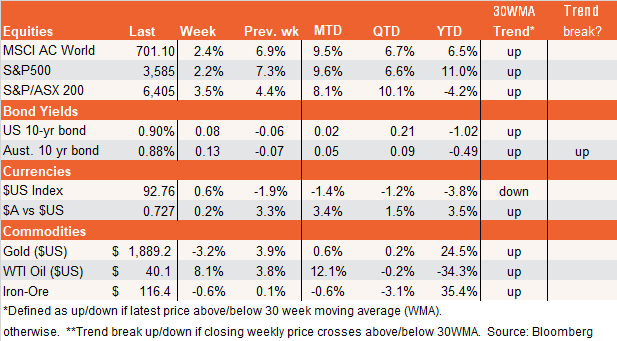 Global post-U.S. election optimism continued last week, buoyed by hopeful signs with regard to a COVID vaccine. The S&P 500 rose 2.2% after a solid 7.3% gain in the previous week to reach a new record high.

While Pfizer’s vaccine results suggested an impressive 90% effectiveness, initial market exuberance was then tempered by the reality of production and distribution challenges before it could be widely used next year. A further decent drop in U.S. weekly jobless claims also added to the evidence that the economy has continued to recover pretty well into the December quarter, notwithstanding rising COVID-19 cases.

That said, with the case count surging in the U.S. over the past week or so, and more cities announcing a return to restrictions, it would not surprise if U.S. economic data starts to cool for a time. America’s third-largest city, Chicago, announced a return to a ‘stay at home’ lockdown for 30 days, following a surge in new cases higher than that seen in April – albeit with still a notably lower number of deaths (at least so far). With cases also rising in New York, there’s a growing risk that tougher restrictions – even a return to lockdown – could be imposed in America’s biggest city over the next week or so.

Meanwhile, it does not help that hopes for further near-term U.S. fiscal stimulus have all but evaporated, and a package might now not see the light of day until Biden takes control in late January.

All up, the near-term picture is quite mixed – which one would think should cause equity markets to at least consolidate for time. While COVID rages on in the United States, the market knows that fiscal and monetary stimulus is waiting in the wings, vaccines are being furiously developed, and that economic activity has so far shown an admirable capacity to bounce back quickly once temporary restrictions are lifted. There are also tentative signs that recent restrictions in Europe are leading to a levelling-off in new infections.

Also of interest is the lift in bond yields of late and a further attempted rotation from growth to value stocks (note the tech-heavy NASDAQ-100 Index actually lost ground last week). Unless validated by rising inflation and/or central bank talk of ‘re-normalising’ interest rates, it’s hard to see long-term bond yields rising much further (given cash rates are locked at around zero). I’m also dubious that value stocks – such as energy and financials – are about to embark on a sustained multi-year outperformance of tech/growth – though they could enjoy five minutes of sunshine as the dark clouds over the global economy gradually lift.

While’s there is a smattering of data in the U.S. this week (retail sales and industrial production), market focus I suspect will remain on U.S. COVID cases and any further tightening in restrictions along with Washington’s glacial pace of stimulus talks.

As anticipated, we did get a decent lift in both business and consumer confidence last week through the NAB and Westpac surveys respectively. Remarkably, as seen in the chart below, consumer sentiment is back at pre-COVID levels despite a notably higher unemployment rate. 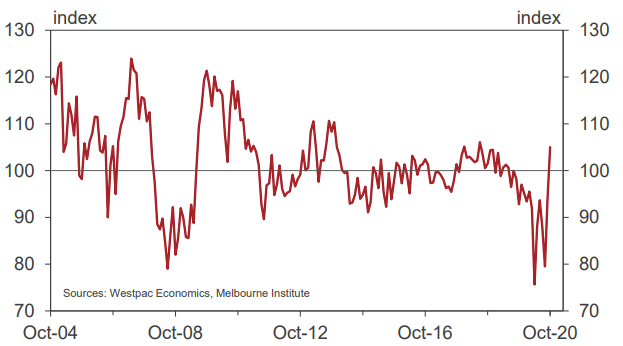 The S&P/ASX 200 Index lifted an impressive 3.5% last week, with the beaten-up financial sector rising by 5%. The market has now clearly broken above the sideways range that has been in place since early June.

Helping local market optimism last week were further moves by state governments to ease border restrictions – though no sooner had that happened, than Adelaide revealed a hotel outbreak which only got worse over the weekend! All this only highlights the challenges of getting back to normal (even without global tourism) without a vaccine and given the almost zero tolerance of most state governments to COVID cases.

In terms of the week ahead, the RBA Governor is speaking tonight and again on Wednesday – though it’s hard to see what more monetary information he can provide a now well-informed market. Based on already known weekly data, Thursday’s October labour market report is expected to show a second successive monthly reversal in job gains of around 30K, with the unemployment rate expected to rebound to 7.2% from 6.9% – reflecting both Victoria’s lockdown but also, a bit more worryingly, a cooling in jobs in other states. 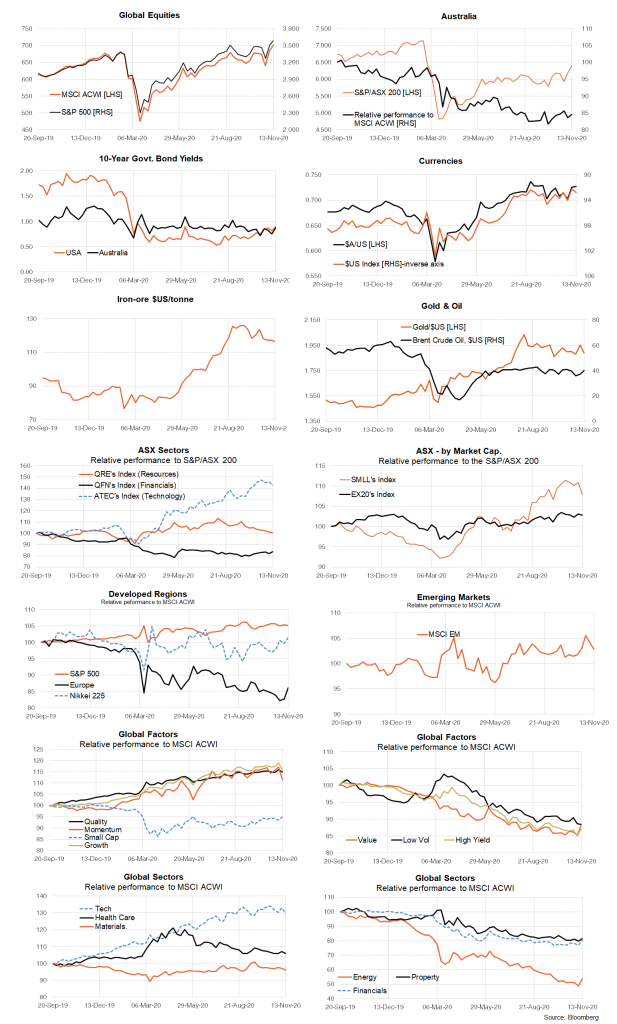