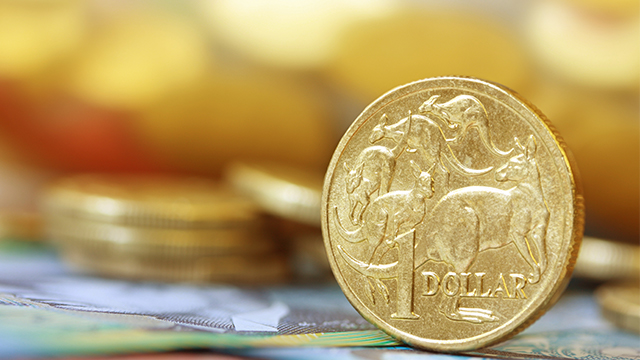 Unlike investing in local shares and property, investors considering exposure to international shares and commodities face the decision of whether to hedge the associated foreign currency exposure.

And of course, for a number of investors, currency hedging can be used as a simple way to remove an additional element of uncertainty in investment returns – and investing in this way means that investors do not have to concern themselves with the impact of often volatile currency fluctuations.

For more detail on how currency moves affect hedged vs unhedged investment returns, please see the technical appendix below.

The chart below details the historical returns from global equities on both a hedged and an unhedged basis – along with the value of the $A against a basket of global currencies of countries within the global equity index. 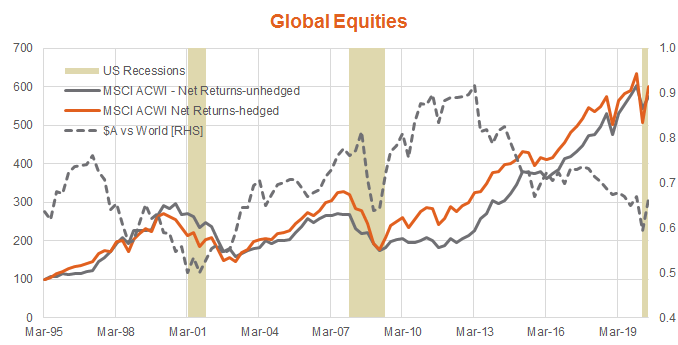 As evident, over the past 25 years at least, the $A has experienced marked cycles of appreciation and depreciation around a generally flat underlying trend. As a result, the returns from global equities over this long period have been broadly similar on a hedged and unhedged basis (both around 7.5% p.a.).

On this basis alone, and provided the $A remains in a long-run flat trend against other global currencies, there is not a clear cut long-term case to hedge or leave unhedged broad long-term exposure to global equities.

That said, over medium-term time periods, it’s also evident that the $A can sometimes be either positively or negatively correlated with global equity bull market periods. In the late 1990s – and again since around early 2013 to the present – the $A tended to fall even as global equities rose – boosting returns from the latter in unhedged terms. Between 2001 and 2013, however, the $A tended to rise with the rise in global equities, meaning investors would have been better off with hedged global investment exposures.

What causes these shifting correlations between the $A and global equities?

In essence, as evident in the chart below, it appears to reflect whether the drivers of global economic growth and equity market performance tend to favour relative performance of Australian corporate earnings and equity prices. Technology booms – as in the late 1990s and much of the past decade, have tended to undermine relative Australian equity and currency performance – which in turn has favoured international investing on unhedged terms. By contrast, commodity booms, as evident in the decade after the Dotcom bust, have tended to boost relative Australian equity and currency performance – which has favoured hedging exposure to international equities. 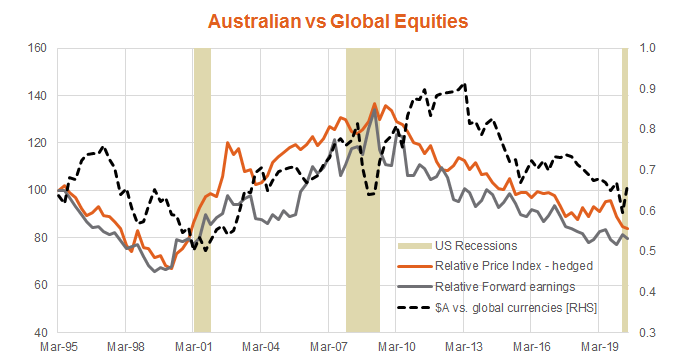 Source: Bloomberg. MSCI ACWI vs. S&P/ASX 200 Index. Past performance is not an indicator of future performance.

Last but not least, a final feature of the $A and global equity relationship is worth pointing out.

Over the very short-run (say over a few months) the correlation between the $A and global equities tends to be positive – as both are considered ‘risk-on’ assets that move together in line with the ebb and flow of short-run global investor sentiment. What’s more, this positive correlation is especially evident during major ‘risk-off’ periods or global equity bear markets.

The past few months of “risk-on” market behaviour has again demonstrated some of the benefits of hedging at the right times. As seen in the chart below, the U.S. Federal Reserve’s extreme monetary stimulus has helped weaken the $US versus the $A, whilst at the same time helping to push up gold prices. 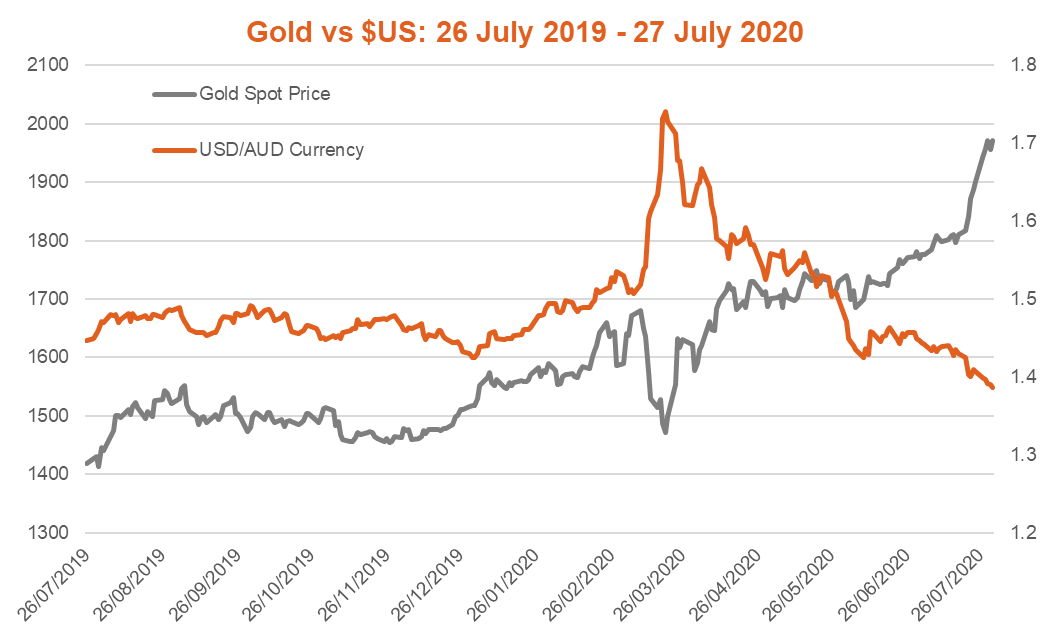 As a result, a hedged gold bullion exposure, such as through the BetaShares Gold Bullion ETF – Currency Hedged (QAU), has performed a lot better than an unhedged gold exposure.

The same is true of hedged exposure to global equities, such as via the Nasdaq-100.

In short, in a period when the U.S. Federal Reserve is providing extreme monetary stimulus – which in turn is helping weaken the $US – it could well make sense to hedge exposure to global investments (such as gold and equities) likely to do well in this environment.

Against this background, in our view there are four reasons an investor might consider currency hedging, at least on occasion:

Investing involves risk. The value of an investment and income distributions can go down as well as up. Before making an investment decision you should consider the relevant Product Disclosure Statement (available at www.betashares.com.au) and your particular circumstances, including your tolerance for risk, and obtain financial advice. An investment in any BetaShares Fund should only be considered as a component of a broader portfolio.

By way of example, to invest in U.S. stocks, investors (either directly or indirectly through their chosen fund manager) must convert their $A into $US in order to make the purchase. When the time comes to sell these investments, the $US proceeds then need to be converted back into $A.

The total return to local investors in $A reflects the combination of both the $US return on stocks held and the change in the $A/$US exchange rate. If the $US value of the stocks rise, for example, but the $A also rises against the $US over this period – the returns in $A terms from the offshore investment will be reduced. By contrast, if the $A falls against the $US over this period, the $A returns from the investment will increased.

So which is better – hedging or not hedging? There really is no one correct answer – it really depends on the investor’s goals and (obviously) any particular currency views they might hold.

Currency hedging effectively negates much of these currency effects through borrowing US dollars at the time of purchase and using the proceeds to invest in Australian dollars (and adjusting this borrowing over time in line with the $US value of the investment). Apart from transaction costs, hedging in this way also produces either a positive or negative interest income over time depending on whether Australian interest rates are above or below those in the U.S. When Australian interest rates are above U.S. rates (which typically has been the case in recent decades) hedging $US exposure has tended to also produce positive interest income for investors in currency hedged investments, as the interest earned on the invested Australian dollars is greater than the cost of borrowing the US dollars.